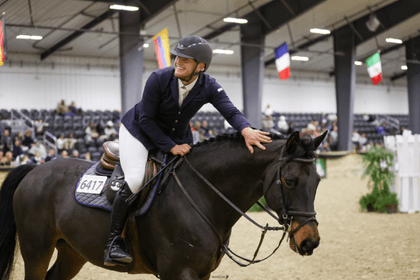 Wilmington, OH – The 2022 Midwest Indoors series came to a close at World Equestrian Center – Wilmington Sunday, November 20. Michael Burnett and his own Chagrand dominated jumper action in the Sanctuary Arena with a clean sweep in their respective classes. Elaina Davis and Delanie Borders earned their well-deserved spotlight after winning their respective sections of the WEC Ohio Medal Final.

Burnett and Chagrand were unbeatable all week in the Sanctuary. Burnett’s 13-year-old gelding by Chacco Blue did not touch a single rail, winning all three classes, each time besting a field of top entries. The duo took home the lion’s share of prize money claiming the blue ribbon in the $1,200 1.35 Meter Jumper, $10,000 WEC Welcome Stake and $30,000 WEC Grand Prix.

“Charlie [Chagrand] is a 13-year-old by Chacco Blue. He is my most special horse. I have a lot of amazing ones in the barn that will do these classes at some point, but he is my top horse at the moment.”

Roman Mezger and Viarado snagged the victory $10,000 WEC Futures Prix. The pair topped a competitive field of 21 horse-and-athlete combinations. Mezger piloted Utopia Investments LLC Viarado to a double clear round, taking an early lead with a jump-off time of 34.413 seconds. They remained uncatchable for the entirety of the class to top the leaderboard.

“I had no expectations going in today. I went in and I was very nervous that she would be spooky, but she was awesome, and I just wanted to go in and have fun. It is like home here and we are planning to show here all winter,” comments Davis.

In the WEC Ohio Medal Final 2’, 2’6”, Delanie Borders took home top honors aboard her own Cornets Design. “Otto [Cornets Design] is such a team player. Over fences I was just focused on keeping a consistent pace. I was a bit nervous about the two bending lines because they came up quick, but they ended up working out really well for me,” comments Borders.

Catherine Rinehart caught the ride on her son’s horse, Chablis 162 in the $10,000 USHJA National 3’ Open Hunter Derby.  The 12-year-old Holsteiner mare owned by Luke Rinehart jumped to scores of 89 and 92 to take the win. Rinehart also took home the red ribbon aboard Hero.

In the $10,000 USHJA National 3’ Non-Pro Hunter Derby, Owen Gajoch was crowned champion aboard his very own, Breathless. The new partnership held the lead for the entirety of the class.  “It was only our fourth or fifth derby together. We have only had him for three months now. We threw up some high scores at GLEF [Great Lakes Equestrian Festival] in some tremendous crowds, so the future definitely looks bright.”

Congratulations to all entries on a successful start to the 2022 Midwest Indoors Series! We look forward to having you back for the WEC Wilmington Winter Classic Series.