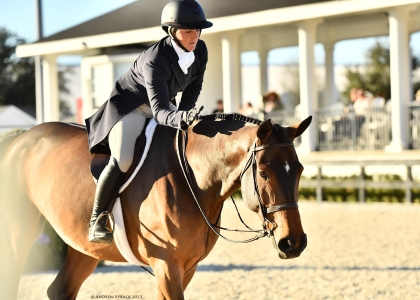 Watch Brazil and the United States battle it out over the $100,000 Coors Light Grand Prix jump-off track during week I of the 2023 Winter Spectacular Show Series.

Aaron Vale and Cartgolot PS closed out the week with a win in the $15,000 Taylor Harris Insurance Services 1.45m Jumper Classic.

“He came to me mid to late summer. The goal is to get him ready for the big classes. He has a lot of ability, but doesn’t steer the best. He’s an excited horse in a kidish way. He’s like a kid that you tell to go one way, but he sees the candy store and wants to go the other direction. Today was the first day where he jumped with focus and used some technique rather than throwing himself in the air.”

“I was shocked that so many riders went clear. It was big enough and it was challenging enough, but the horses just thrive here. They always jump so well under this atmosphere. The jumps are gorgeous, the footing is perfect, and the crowd is electric. If you can jump here, you can jump at the Olympics. The jump-offs are always so fast, and the competition is so strong. This is the best venue to prepare for any competition.”

Penny Brennan and Vertigo Delorme were dynamite in the $15,000 Buckeye Nutrition Futures Prix.

“He has a heart bigger than Texas and more game than Michael Jackson. He is a grenade that goes out there to win each and every time. He’s the smartest horse I have ever met and looks through my soul. He’s fourteen now, but he’s by Chacco Blue, so he will be in his prime until he is 25.”

“Pablo is naturally fast across the ground, and he’s very careful. The one question was the striding in the last line and the vertical at the top of the arena. A lot of people had a rail at that vertical because they were shifting left, so I aimed to stay straight then look for my turn,” said Douglas. “I found the second-to-last oxer positive, so I was able to walk down the last line in seven.”

Superior scores put Samantha Schaefer and In The Know on top in the $20,000 Golden Ocala Golf & Equestrian Club 3’6”-3’9” Hunter Derby.

“When I was first learning the course, I was a tad stressed because there was a lot to remember. The ring looked stunning. They really put a lot of effort into the course today and it rode very nicely. I am not much of a course walker, but today, I had to go out there or else I would have gotten lost in this beautiful sea of greenery.”

“The handy was a blast. There were so many options. I was feeling a little bit rusty this morning to tell you the truth, I haven’t shown in three months. I walked first thing this morning and took a look at some of the turns and decided which way I wanted to jump some of the option fences. When it came time to do it on my first horse, I forgot where I was supposed to go, and I ended up taking too tight of a turn.”

“We have had her for almost a year now. We actually got her at this horse show last year. We have been doing a lot of national derbies and 3’3” green classes. She’s been incredible. This is a lot to ask of any young horse, but she has always stepped up to the plate.”

“His stride has always been a huge strength of his – it’s deceptively and abnormally large. I have had a few riders tell me that they don’t ever watch my round because it’s just too unrealistic for their normal horse’s step. Frosty does it without trying.”