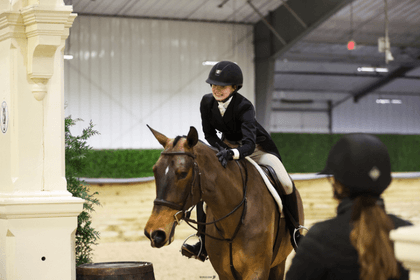 Wilmington, Ohio – During Winter Classic #4 of Winter in the Midwest Series at World Equestrian Center – Wilmington, the hunters took center stage for World Champion Hunter Rider (WCHR) competition. Jason Berry stole the spotlight in the R+L Arena, earning a trifecta in the $15,000 USHJA National Open 3’ Hunter Derby. While jumper action in the in the Sanctuary Arena this week saw Genevieve Munson landing a double victory in the $30,000 Tribute Grand Prix.

Munson of Rogers, Arkansas, was unbeatable in the $30,000 Tribute Grand Prix Saturday evening in the Sanctuary. Of the seven horses to return for the jump-off, Munson was the first to go on her very own Contendro Star (Contendro I x Gloria), landing through the timers in 33.419 seconds for second place. Charlene (Clarimo x Raja II) was the final entry to return. Munson piloted the mare to the blue ribbon in 32.935 seconds.

Munson shared her strategies for the jump-off phase, “The plan definitely differed between horses. They are both very quick, but in totally different ways. Nigel [Contendro Star] has the gift of a large stride, so the turns are a lot harder for him. This jump-off played to his strengths because it was a long line and then a flat turn to another long line. I was able to do six strides which was a double leave out compared to what the other horses did.”

“The mare [Charlene] gets flat whenever she gets too stretched out and will have rails down. Her gift is how quick and handy she is, so it did not play to her strengths as much. I asked a lot of her today, but she gave me all that she had. She was incredible.”

Earlier Saturday afternoon, fourteen combinations tried their hand at the $10,000 Futures Prix in the Sanctuary Arena. Despite only being partnered for a week, Kyle Perkovich of Long Grove, Illinois, and Lisa Goldman-Smolen’s Bengsston (Buballu VDL x Uzmakieka VDL) prevailed, demonstrating experience beyond their time together to secure an impressive win in 36.659 seconds.

“I wanted to get a really good canter to the first fence. I had my path in mind to get to the second oxer. I t was a skinnier oxer, so I wanted to make a tighter turn to that and stay out and jump the vertical to shape up the seven and stay on that quick step. He is a short strided horse, but he squared up well and jumped across the vertical well where most people were having trouble. I wasn’t sure if I was going to do six or seven in the last line, but he was on it so we did six,” Perkovich comments on his jump-off round.

The first hunter derby Friday of 2023 hosted myriad of exquisite hunters for WCHR week, though none could best Berry in the $15,000 USHJA National Open 3’ Hunter Derby Friday evening. With a pair of 91’s and an overall score of 182, Berry of Jason Berry Stables in Verona, Virginia, topped the class aboard Joan Alberti’s Brugh’s Mill (Homerus E x I-Thake). Additionally, Berry earned the red ribbon with David Beisel’s The Boyfriend (Gracieux x Vironja), and rounded out the podium on Alisa Berry’s On Point (Cola Zero x Lolita).

In the $15,000 USHJA National Non-Pro 3’ Hunter Derby, Magnolia Labuda, training out of Petrie Show Stables in Medina, Ohio, piloted her longtime partner, Amando M (923 Amarillo x Ariella 216), to the top of the leaderboard.

Labuda shared about her very own Amando M, “I have had Manny [Amanda M] for a little over five years now. I got him when he was a baby, he was only five. It is really nice to see him grow up and it is nice to get a lot more consistent. I am so proud of him. It is the best thing ever to win during WCHR week, especially since I have had him all through my junior years and now as an amateur.” The duo affirmed their many years of growth together in the highly anticipated class, jumping two seamless rounds for a winning overall score of 168.

Darby Pease of Windcrest Farm in Lexington, Kentucky, added another win to her belt in the $10,000 WEC Welcome Stake. With her winningest partner, Carel Van Donderen (Acolino x Terania Die Hoeghte), Pease started out her 2023 season right where she left off. Continuing her winning ways from Winter Classic #3 where she won the $30,000 WEC Grand Prix, she laid down a polished jump-off round in 37.323 seconds to take top honors Thursday evening.

Congratulations to all entries on a successful first show week of Winter in the Midwest 2023! We look forward to having you back for Winter Classic #5.