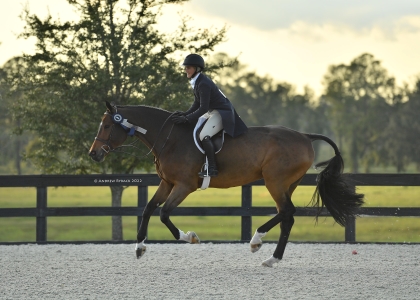 Ocala, FL – Hunter/jumper competition sanctioned by US Equestrian (USEF) returned to World Equestrian Center – Ocala last week amidst an enchanted Winter Wonderland. Highlights include Samantha Schaefer and In The Know receiving impressive scores of 93 and 89 to take the top prize in the $12,500 WEC Ocala 3’6”-3’9” Hunter Derby. Santiago Lambre and The Diamant Rose Z, wowed the crowd and secured victory in the $100,000 Lugano Diamonds Grand Prix on Saturday night. Read on for additional highlights from the week.

Watch Santiago Lambre (BRA) and Rowan Willis (AUS) race against the clock in a competitive 17 horse jump-off. Ultimately, Lambre and Ashland Farm’s The Diamant Rose Z rose to the top of the leaderboard to secure the victory.

“I was a tough course. There were a few lines that were pretty tight, but we ended up coming out with a plan and it worked out well,” said Brooks. “When I rolled back to the orange vertical, I caught it on a bit of an angle so I could bow out and move up to the double combination rather than pull.”

“I knew Rowan was the first one in, and he went quick, but there were a few places where he left it open to be quicker. My mare is very quick off the ground and turns on a dime, so I knew if I could make a few tidy turns and use her speed off the ground to my advantage then I might be able to win it. Then, I just tried to be as quick as possible to the final fence.”

“He’s if you dreamed up the perfect horse. He’s easy to ride and allergic to lumber. He’s incredibly brave, unbelievably elastic and has a hind end like a whip. It’s a rare combination. I think he’s going to be something very special, and I am so thankful to be able to produce such an astonishing horse.”

Samantha Schaefer and Madeline Schaefer’s In The Know bested a competitive field to win the $12,500 WEC Ocala 3’6”-3’9” Hunter Derby.

“Sometimes I go a little too crazy in the handy and I knew I had a bit of a lead, so I wanted to stay more conservative. I had every intention to go around to the final line, but I landed, and the turn showed up. I had a tiny rub, so I almost paid for it, but overall, he was fantastic.”

He thrives in the handy. He does much better when he has less time to anticipate the jump and he still has his jumper roots, so he likes the turns.”

Mary Beth McGee and her own C-Star emerged victorious in the $10,000 WEC Ocala 3’ Jr/Am Hunter Derby. The pair received a first-round score of 87 and a handy score of 85 for a two round total of 172 for the win.

“I caught fence one forward. He didn’t turn as well as I wanted to fence two, but when I asked for more to the skinny, he gave it to me. We were almost too fast to the point where he had to jump up a bit slower to be careful, then that took the six strides out of play. He ended up veering off the right a little too much, but it ended up working out well because I was able to land left to get to the double combination. Then I tried to be as fast as I could to the final two fences.”

Emma Ensor and her own Woodlands Teddybear captured the $2,000 WEC Ocala Pony Hunter Derby on Friday.

Congratulations to all competitors on a successful week of equestrian sport!