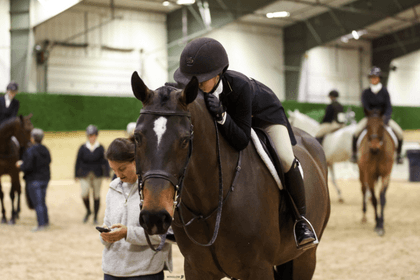 Pease took on the class with unwavering support behind her. Her trainer Teri Knowlton, as well as Tom and Hillary Gromus. “Nobody works harder than this girl does. It has been so crazy to watch her journey with all these horses because she never gives up. The first win is luck, the second one is real,” comments Knowlton.

“He [Graf Joe] is a really cool horse. We bought him as a 6-year-old and did him through all the young jumper competition. We have had him for quite a few years now and I think he is just hitting his prime,” said Kelly.

For the second week in a row, Isabella Griffin training out of Westminster Farm in Huntsville, Alabama, and her own Diacasir (Diarado x Ucarola) earned top honors in the $15,000 USHJA National Non-Pro 3’ Hunter Derby. The duo bested 27 horse-and-athlete combinations with an overall score of 180.

“My horse is better off the right lead. I took a bit of a different approach and went off the right to the end jump. I came back to the bending line in a forward eight strides and then took the inside track to last jump to secure the handiness,” Griffin comments on her strategy in the handy round to stay on top of the leaderboard.

“I have been riding Vincent for about a year and a half. He is such a great horse, and he is very careful. I am really happy with him and how he has performed at this venue. I hope to eventually move him up to some bigger grands prix,” shared Rinehart.

The $3,500 2’6 Non-Pro Derby took place Saturday in the R+L Annex Arena with Zoe Johnson and Chandler Z coming out on top.

Congratulations to all entries on a successful second week of the Winter in the Midwest Series! We look forward to having you back Winter Classic #3 Gifts Under the Tree.