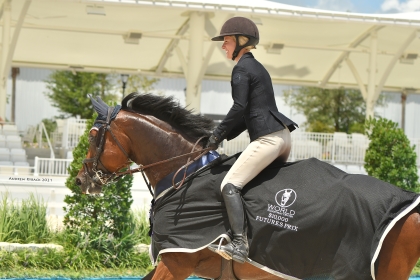 Early on Sunday morning, the $15,000 WEC Ocala 1.40m Jumper Classic kicked off with 17 entries vying for the win over a difficult track designed by Tucker Williams. The course presented a challenging triple combination and double combination that tested many riders throughout the class. Two entries managed a clear first round, but it was Ireland’s Darragh Kerins and Nrg Farm LLC’s Delight M-G C De Leuze that took first place.

Kerins and the 12-year-old Belgian Warmblood mare were the first pair to jump a clean first round. Kerins and Delight M-G C De Leuze (Armitage x Vox Dei MG-C De Leuze) jumped the first round effortlessly. The talented mare was jumping to the top of the standards not coming close to hitting a single rail. The pair cantered through the finish stopping the clock at 75.400 seconds. Kerins and the scopey mare advanced straight to the jump-off, rolling through the course on a nice steady gallop, easily leaving all the rails up to stop the clock at 42.384 seconds.

Forty-four horse-and-rider combinations took to the WEC Grand Arena Saturday night under the lights to contest the $75,000 Lugano Diamonds Grand Prix. Tucker Williams designed the difficult track that featured three double combinations that tested a multitude of riders. Eight entries achieved a clean first round and only two jumped double clear, but it was Aaron Vale and Don Stewart and Sleepy P Ranch LLC’s Major that took home another grand prix win.

Vale and Major (Carmargue x Pinot) who have now earned seven Grand Prix wins at World Equestrian Center – Ocala, were the fourth pair on course to deliver a clear first round. Vale was happy with how the first course rode, “I rode everything exactly how I wanted to. Everything that I planned and walked happened just how I imagined it.” Vale and Major produced an effortless first round easily jumping each fence to stop the first-round clock at 74.571 seconds.

Vale and Major started the jump-off on a nice gallop doing nine strides from fence one to two. “I rode back to the plank [fence 3] just how I wanted to. Then I was very quick to the vertical [fence 5] after the combination. I ended up doing seven strides in the roll back, but I could see everyone else’s track and I was way inside all of them. I landed on a nice gallop, I thought about waiting but I knew if I waited, I would have just pulled the whole way there, so I just kicked and after a stride or two I knew I was right there.” The dynamic pair raced through the final timers stopping the clock at 34.768 seconds, two seconds faster than second place finishers Jordan Petersen and Diamant’s Legacy.

Earlier on Saturday afternoon, 30 entries contested the $10,000 WEC Ocala Futures Prix 1.30m-1.35m but it was Dorothy Douglas and MTM Pablo that snatched the blue ribbon. Douglas has had previous success on MTM Pablo (Perigueux x Celina) winning Week III’s $15,000 WEC Ocala 1.40m Jumper Classic. Douglas and the eight-year-old Warmblood gelding were one of the last few pairs to enter the class, delivering a very nice first round jumping to the top of the standards to stop the first-round clock at 74.869 seconds. The pair advanced straight to the jump-off, flying through the course making up ground when it was possible to stop the clock at 36.869 seconds.

Mitchell of Wellington, Florida, and his own Landmann were on fire Friday. Mitchell and the warmblood gelding preformed a foot perfect first round, taking all three high options to earn the highest first round score of 95. Mitchell and Landmann returned for their handy round, flowing flawlessly through the handy course, easily soaring over each fence while jumping all three high options to earn a handy score of 91.5 for a two-round total of 186.5 for the win.

Nineteen entries gathered to the CaptiveOne Advisors Indoor Arena early Friday morning to compete for the top prize in the $10,000 WEC Ocala 3’ Hunter Derby but it was Megan Young and Lee D. Cesery’s Comanche that brought home the blue ribbon. Young and the 13-year-old warmblood gelding performed a effortless first round taking all three high options to collect a score of 89. Young and Camanche came back for the handy course, taking each tidy inside turn while jumping all three high options to receive a handy score of 91.5 for a two round total of 180.5.

Feature class action for Week VIII of the Ocala NSBA Summer Series kicked off early Thursday morning as 34 horse-and-rider combinations vied for the win in the $15,000 WEC Ocala Welcome Prix. Fifteen entries managed a clean first round and nine jumped double clear, but it was Jamie Taylor from Temecula, California and Ali Nilforushan’s Cocoliche of Greenhill Z that snatched the win.

Congrats to all on another successful week of equestrian sport!