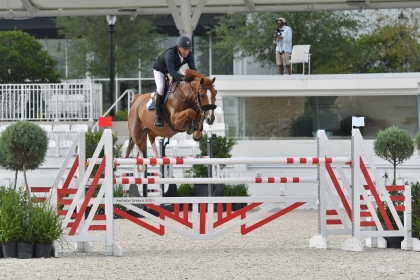 Week VIII of the World Equestrian Center – Ocala NSBA Summer Series wrapped up early this morning with the $15,000 WEC Ocala 1.40m Jumper Classic. Seventeen entries vied for the win over a difficult track designed by Tucker Williams. The course presented a challenging triple combination and double combination that tested many riders throughout the class. Two entries managed a clear first round, but it was Ireland’s Darragh Kerins and Nrg Farm LLC’s Delight M-G C De Leuze that took first place.

Kerins and the 12-year-old Belgian Warmblood mare were the first pair to jump a clean first round. Kerins thought the course was quite tricky, “The track walked like a hard course. There were a few hard lines, and the triple combination was going away from the gate on a funny angle which caught quite a few people. The time was also pretty tight.”

Kerins and Delight M-G C De Leuze (Armitage x Vox Dei MG-C De Leuze) jumped the first round effortlessly. The talented mare was jumping to the top of the standards not coming close to hitting a single rail. The pair cantered through the finish stopping the clock at 75.400 seconds. “She is a spectacular jumper and give 100 precent every time she steps into the ring.”

Kerins wanted to keep the jump-off smooth, “There was an inside turn back to the double combination but at that stage I was the only clear round so I didn’t want to take a chance and I went around. Thankfully Sharn went around, and my time was just a bit quicker,” said Kerins.

Kerins and the scopey mare advanced straight to the jump-off, rolling through the course on a nice steady gallop, easily leaving all the rails up to stop the clock at 42.384 seconds.

Just behind Kerins and Delight M-G C De Leuze were New Zealand’s Sharn Wordley and his own Mick Jagger (Chacco-Blue x Acentora). Wordley and the 13-year-old Hanoverian gelding were the only other entry to jump a clear first round without any faults. Wordley and Mick Jagger delivered a smooth first round stopping the clock at 74.181 seconds. The pair advanced straight to the jump-off rolling through the course to stop the clock at 42.483 seconds, just one hundredth of a second behind Kerins and Delight M-G C De Leuze.

Rounding out the top three in today’s $15,000 WEC Ocala 1.40m Jumper Classic were Alejo Maddalena and Inversur3, LLC’s Puertas Larcelo. Maddalena and the ten-year-old Silla Argentina gelding delivered a smooth first round leaving all rails up to stop the clock at 84.674 seconds with a time allowed of 83 seconds, to unfortunately earn the pair two time faults.

On Saturday afternoon, 30 entries took to the WEC Grand Arena to contest the $10,000 WEC Ocala Futures Prix 1.30m-1.35m. Tucker Williams built the technical track that featured a challenging triple combination that caught many riders throughout the class. Eleven entries produced a clean first round and only four jumped double clear, but it was Dorothy Douglas and Davenport Farm’s MTM Pablo that snatched the blue ribbon.

Douglas has had previous success on MTM Pablo (Perigueux x Celina) winning Week III’s $15,000 WEC Ocala 1.40m Jumper Classic. Douglas and the eight-year-old Warmblood gelding were one of the last few pairs to enter the class, delivering a very nice first round jumping to the top of the standards to stop the first-round clock at 74.869 seconds.

Douglas had a plan, “My goal was to jump three on a little bit of a bend so I would already be landing right to get to the next jump. Mike [McCormick] is always telling me I need to choose where I want to land, not just where I take off.”

Douglas and MTM Pablo flew through the course making up ground when it was possible, “After the in-and-out I opened up my left hand to go left and I ended up getting eight strides to the last fence.” The pair soared through the finish stopping the clock at 36.869 seconds to earn the win.

Second place honors went to Marcus Gruenthal and Infante SK who were early leaders in the class. Gruenthal and the eight-year-old Dutch Warmblood gelding jumped a fast and clean first round stopping the clock at 70.926 seconds, well under the time allowed of 79 seconds. Gruenthal and Infante SK advanced straight to the jump-off galloping through the lines and taking tight inside turns to stop the jump-off clock at 37.737 seconds being the first rider to jump double clear.