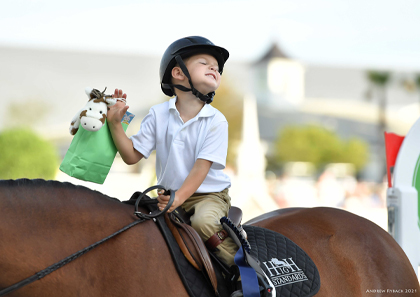 Thursday’s $20,000 WEC Welcome Prix saw a field of 35 entries contest a technical course. Twelve entries managed a clear first round with eight pairs ultimately jumping double clear, but it was Molly Ashe Cawley of Louisburg Farm in Wellington, Florida, and Dover, Massachusetts, aboard Louisburg Farm’s Berdien (Bustique x Queen Z) that took the win. The duo jumped double clear in a time of 41.361 seconds to top the class.

Before the start of the handy round in the $75,000 WEC Hunter Derby 3’6″-3’9″, the prestigious Style of Riding Award was presented to Samantha Schaefer for her classic style and her sportsmanship. The Style of Riding Award is generously donated by Bill Rube to be awarded to the rider who best displays the American Style of riding in the ring and sportsmanship outside of the competition arena. Schaefer received an elegant leather duffel bag and wore a white rose corsage on her lapel throughout the handy round to signify her achievement.

The Shapley’s Champion Groom Award for the best turnout in the class was presented to the grooms of 3rd place finisher in the $75,000 WEC Hunter Derby 3’6″-3’9″, Cartel. Shapley’s is a proud sponsor of the World Equestrian Center and is thrilled provide an award each week of the Winter Spectacular to the groom of the best turned out horse. Cartel’s grooms received a Shapley’s Award Bucket for his stunning turnout.

Samantha Schaefer proved unbeatable on Friday, also topping the morning’s $75,000 WEC Derby 3′ Open aboard Madeline Schaefer’s Sutton Place (Valentino x Argrepina). The duo laid down a flawless first round, taking all four high options for a score of 91. They returned last in the handy round, earning a score of 93.5, totaling 184.5 to win the class.

Friday afternoon’s $75,000 WEC Derby 3′ Non Pro saw a highly competitive field of 38 entries vying for the win. Competition was fierce, but it was Haleigh Landrigan and Ava Berman’s Skorekeeper (Casall) that prevailed. The duo found a foot-perfect first round, taking all four high options for a score of 90. They returned near the end of the order in the handy round, earning a score of 87, totaling 177 for the win.

Saturday night’s $200,000 Lugano Diamonds Grand Prix saw 47 entries over a course co-designed by Anderson Lima of Brazil and Bobby Murphy of Lexington, Kentucky. Ten entries advanced to the jump-off, but it was Aaron Vale and Taylor Granat’s Candro Van De Zuuthoeve (Thunder Van De Zuuthoeve x Walach Van De Zuuthoeve) that set the pace with a time that would prove unbeatable. They were first to contest the course in the jump-off and negotiated an impossibly quick, clear round in 41.208 seconds to top the class.

Congratulations to all entries on a fantastic season at World Equestrian Center — Ocala!