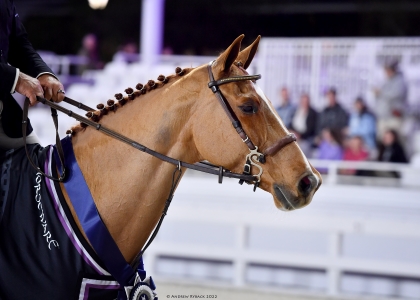 Sadler and Cinven CR were the first pair down the ramp into the WEC Grand Arena to contest the $15,000 WEC Ocala 1.45m Jumper Classic, producing a clear first round and stopping the clock at 84.802 seconds, just within the time allowed of 85 seconds. Sadler and the 14-year-old Holsteiner gelding advanced straight to the jump-off, navigating a smooth and fast jump-off, not touching a single rail to stop the clock at 36.046 seconds, to secure the win.

The WEC Grand Arena hosted an exhilarating Saturday night grand prix as 33 entries vied for the win in the $75,000 Golden Ocala Golf & Equestrian Club Grand Prix. The challenging tracks for Week I’s Saturday night grand prix were designed by Bobby Murphy. The track featured a tight time allowed, a tricky triple combination and The Equestrian Hotel wall. Six horse-and-rider combinations managed a clean first round, and only two jumped double clear, but it was Aaron Vale and Thinks Like A Horse’s Elusive that captured the top prize.

Vale and Elusive (Rodrigoo x Alouette) were the second pair on course, delivering a fast and smooth first round stopping the clock at 82.839 seconds, well within the time allowed of 85 seconds. “The course today was challenging. The time allowed was just short enough that you had to keep moving. The jumps went up to 1.50m, so it’s a little bigger than the summer. It asked some challenging questions from the start; the wall jump was fence number three which is quite a spooky fence. So that fence caught a few out, the combinations caught some horses and the tight time caught some riders, but that’s what a course is supposed to do.”

Vale and the 13-year-old Dutch Warmblood gelding were the first pair to return to the jump-off.

Vale and the scopey Elusive started on a strong gallop, slicing fence one to soar to fence two in 11 strides. The pair quickly turned back to the double combination where they landed right and soared to the orange skinny vertical in 12 strides. The pair walked down the seven and galloped to the tall pink vertical in 11 strides. Aaron and Elusive swiftly turned back and streamlined to the Golden Ocala Golf & Equestrian Club oxer where they landed left and took a tidy inside turn to the last vertical, stopping the clock at 49.906 seconds, a time that no other competitor could best.

Earlier on Saturday, Thirty-one entries gathered at the WEC Grand Arena to contest the $10,000 Buckeye Nutrition Futures Prix. Bobby Murphy designed the winding tracks that featured three double combinations that caught many horse-and-riders throughout the class. Eleven entries produced a clean first round and four jumped double clear, but it was Camille Maddrix and Caroline Michele Dugas’s Skyfall (Vigaro x Twi Light) that snagged the win. Maddrix and the 13-year-old Dutch Warmblood gelding navigated a smooth and very fast first round, leaving all rails up to secure the class’s fastest first round time of 78.727 seconds, well under the time allowed of 89 seconds. Maddrix and the springy Skyfall advanced straight to the jump-off, starting on a nice gallop to fence one to quickly roll to fence two. Maddrix and Skyfall soared through the rest of the course, rolling around the turns not pumping the breaks once to stop the jump-off clock at 41.700 seconds, to guarantee first.

On Friday afternoon, 20 horse-and-rider combinations took to the WEC Grand Arena to vie for the win in the $12,500 WEC Ocala 1.40m Jumper Class. Thirteen entries managed clean first rounds, and nine jumped double clear, but it was Derek Petersen and the scopey Zechariah 3:9 (Zirocco Blue x Katrina) that took home top honors. Petersen and Zechariah 3:9 produced an effortless first round, jumping each fence with ease to stop the clock at 74.009 seconds. Petersen and Zechariah 3:9 advanced straight to the jump-off, flying through the course to stop the clock at 47.233 seconds for the win.

Steege and the stylish Lafitte De Muze delivered a foot-perfect first round, taking all three high options with ease turning in the class’s highest first round score of 96. Steege and the fan favorite Lafitte De Muze returned and laid down a near-flawless handy round, taking every inside turn, while jumping all three high options to earn an outstanding score of 99, and an overall total of 195.

On Friday morning, 31 stunning hunters took to Tom Hearn’s Eleborate track to compete for the win in the $15,000 WEC Ocala 3’ Hunter Derby, but it was Timothy Maddrix and Hudson Meadows Racing’s The Irish (Saint CYR x Greta Garbo) that captured the class’s highest overall score. Maddrix and the eight-year-old Trakehner gelding floated into the ring, navigating a lovely first round, taking all three high options to earn a score of 87. Maddrix and The Irish produced a foot-by-foot perfect handy round easily completing the difficult turn to the hay bale fence to earn the class’s highest handy score of 93, for a two-round total of 180 for the win.

Nineteen gorgeous entries contested the winding track in Friday afternoon’s $15,000 WEC Ocala 3’ Jr/Am Hunter Derby, but it was Camryn Halley and her own Now and Zen (Cabalito x Special Consideration) that earned the top spot.

Halley and the seven-year-old gorgeous dapple gray gelding navigated a smooth first round jumping all three high options with ease to earn a first-round score of 84. Halley and Now and Zen performed a beautiful handy round, taking each inside turn with ease while walking down the lines to receive the class’s highest handy score of 87 for an overall score of 166.

Feature class action for the series began on Thursday as 29 entries vied for the win over a technical track built by Bobby Murphy of Lexington, KY. Eleven entries achieved a clean first round with five jumping double clear, but it was the first on course, Santiago Lambre and his own The Diamant Rose Z (Toulon x Diamant Z) that delivered the winning round.

Lambre and the 11-year-old Zangersheide mare were the first horse-and-rider combination down the ramp into the WEC Grand Arena. Lambre and The Diamant Rose Z established a rhythm after the buzzard rang, delivering a fast and clean first round stopping the clock at 80.947 seconds, well under the time allowed of 85 seconds. Lambre and the scopey mare advanced straight to the jump-off, galloping from fence one to roll to fence two on a smooth bend. The pair landed right and sliced the orange oxer. Lambre and the fiery mare then dashed through the remainder of the course, leaving all rails up to stop the jump-off clock at 41.722 seconds, a time that no other entry could catch.

Phoebe Weseley and her own Mind’s Eye (Spartacus x Gazelle V/D Velle) prevailed in the $2,500 Non Pro Hunter Derby on Saturday afternoon. Weseley and the 10-year-old Belgian Warmblood gelding delivered a lovely first round, earning a score of 82. The pair returned for the handy navigating a gorgeous round to earn the class’s highest handy score of 85 for a two-round total of 167, to earn first.

Congratulations to all entries on a successful first week of the 2022 Winter Spectacular!