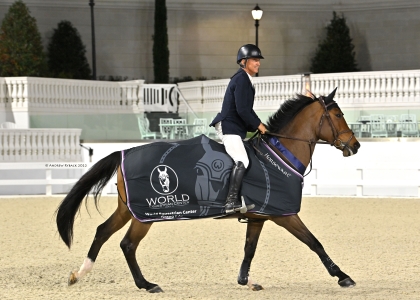 Feature class action during Week II of the World Equestrian Center – Ocala 2022 Winter Spectacular Show Series closed out Sunday with the $15,000 WEC Ocala 1.45m Jumper Classic. Thirteen entries took to the WEC Grand Arena to vie for the top prize over a course created by FEI Level III course designer Manuel Esparza (MEX). Three competitors produced double clear rounds, but it was Aaron Vale and Alise Carrico & Thinks Like A Horse’s Cristo Beech (Its The Business x Ragua) that took a tidy inside turn for the win.

Vale and the 11-year-old Warmblood gelding easily navigated the course to deliver a clear first round, stopping the timers at 83.217 seconds. Vale and Cristo Beech advanced straight to the jump-off galloping from fence one to two in nine strides to quickly land right to soar over the double combination. The pair took a super tidy inside turn that no other competitor attempted to gallop through the rest of the course stopping the jump-off clock at 43.335 seconds, more than three seconds faster than second place.

World Equestrian Center – Ocala hosted another exhilarating Saturday night of equestrian sport as 39 competitive horse-and-rider combinations gathered at the WEC Grand Arena under the lights to vie for the win in the $75,000 Stella Artois Grand Prix brought to you by Tri-Eagle Sales. The atmosphere was thrilling with the grandstands packed with spectators. FEI Level III course designer Manuel Esparza (MEX) created the elaborate tracks that included large outstanding features including a triple combination and triple bar. Ten entries managed a fault free first round and six jumped double clear, but it was Olympic Gold Medalist Will Simpson (USA) and Coxe Horses LLC’s Whoop De Doo (Mr. Whoopy x Double Trouble X) who prevailed for the win.

Simpson and the 11-year-old Warmblood mare produced an effortless first round toward the middle of the order, stopping the clocks at 82.319 seconds.

Simpson shared his strategy for the jump-off, “My plan was to hide away a little bit and not go in such a hurry because Rodrigo [Pessoa] had two back-to-back. A lot of the time I would want to move up and just go as fast as possible. But I was trying to calm myself and stay with Whoopy.”

“Everyone from my team has been working so hard, so it’s great to pull out a win today. It’s a team effort and we share a great camaraderie at the barn. I don’t know what I would do without them. I am also super proud of Whoopy today, I think she is really starting to come into her own,” smiled Simpson.

Lambre and the speedy Cetano Van Aspergem Z delivered a faultless first round, jumping each fence with ease to stop the first-round clock at 81.848 seconds. Lambre and the 13-year-old Zangershiede gelding advanced straight to the jump-off, walking down the first line in seven strides to quickly roll to the liverpool oxer. The pair landed left and took the inside turn that no other competitor attempted to soar over the oxer to land right to jump the green vertical. The pair flew to the Mars Equestrian double combination, to streamline to the last vertical in six strides to stop the jump-off clock at 37.208 seconds.

Tynan and the now 12-year-old KWPN gelding produced a lovely first round, soaring to the top of the standards to stop the first-round clock at 81.077 seconds, well within the time allowed of 84 seconds. Tynan and the scopey Fenise, jumped-off immediately, flying around the entirety of the course leaving out strides while taking tight inside turns to stop the jump-off clock at 41.782 seconds, to ultimately earn first.

Twelve entries contested the $20,000 WEC Ocala 3’6”-3’9” Hunter Derby with scores soaring into the high 80s. The flowing tracks gave competitors multiple opportunities for inside turns and allowed entries to show off their horses’ brilliance, but it was Holly Shepherd and Debbie Holland’s Tybee that caught the judge’s eye.

Shepherd and the 15-year-old Hanoverian gelding by Black Tie navigated a lovely first round while jumping three high options to earn a first-round score of 86. Shepherd and the scopey Tybee were the second to last pair to return for the handy, floating through the course while jumping all four high options to earn a score of 90, for a two-round total of 176.

Thirty-eight horse-and-rider combinations took to the WEC Stadium early Friday morning to contest the $15,000 WEC Ocala 3’ Open Hunter Derby. Competition was fierce with scores soaring into the 90s, but it was Hillary Johnson and Copper Fox LLC’s Suede (Los Angeles x Petite Fleur) that captured the win with the highest overall score of 184.

Johnson earned last week’s Style of Riding Award presented by Bill Rube. The Style of Riding Award was presented to Johnson for her classic style and her sportsmanship. This week, Johnson continued to produce lovely rounds, earning the class’s highest first round score of 91. Johnson and the now eight-year-old Westphalian gelding were the last pair to return for the handy, starting on a nice canter to fence one to turn left to fence two. The pair floated through the rest of the course taking multiple inside turns while jumping all four high options to earn a handy score of 93, for a two round total of 184.

Thirty-eight stunning hunters vied for the win in the $15,000 WEC Ocala 3’ Jr/Am Hunter Derby but it was Nicole Lyvere and her own Vaillero (Vaillant x Highlight Z) that secured the highest overall score of 179.

Lyvere and the 14-year-old Zangersheide navigated a flawless first round, easily jumping all four high options to earn the class’s highest first round score of 90. Lyvere had a successful day, also earning The Style of Riding Award presented by Bill Rube. Lyvere and Vaillero returned for the handy, completing a lovely round, taking each side turn with ease while opting to take each high options to secure another high score of 89, for a two round total of 179.

Fenney and the fan favorite MTM Apple were one of the first few entries down the ramp into the WEC Grand Arena, delivering a flawless first round stopping the clock at 82.170 seconds. Fenney and the now 11-year-old Danish Warmblood mare advanced straight to the jump-off, catching fence one on a nice gallop, landing left to walk to fence two in eight strides. The pair quickly turned back to the Chapel Liverpool to swiftly gallop to the Lugano Diamonds oxer in eight strides. They easily marched down to the double combination in nine strides to streamline the last bending line, leaving all rails up to stop the jump-off clock at 37.192 seconds, posting a time that no other competitor could best.

Alexa Riccio and PS Riverstone’s PS Comic Chrome snagged the $2,500 Non Pro Hunter Derby win on Saturday afternoon, besting 35 other entries. Riccio and the eight-year-old Holsteiner gelding produced a lovely first round to earn a score of 88. The pair returned for the handy navigating a smooth round to earn a score of 83 for a two-round total of 171.

Congrats to all entries on another thrilling week of equestrian sport! We hope to see you all again for Week III of the 2022 Ocala Winter Spectacular Show Series.