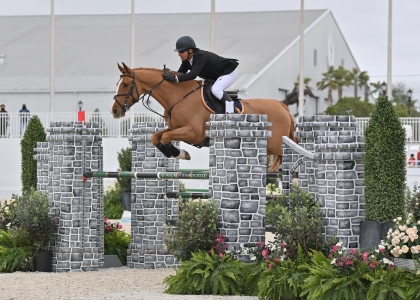 Ocala, FL – Feature class action during Week II of the World Equestrian Center – Ocala 2022 Winter Spectacular Show Series closed out today with the $15,000 WEC Ocala 1.45m Jumper Classic. Thirteen entries took to the WEC Grand Arena to vie for the top prize over a course created by FEI Level III course designer Manuel Esparza (MEX). Three competitors produced double clear rounds, but it was Aaron Vale and Alise Carrico & Thinks Like A Horse’s Cristo Beech (Its The Business x Ragua) that took a tidy inside turn for the win.

With ten WEC Grand Prix wins to his name, Vale hopes to one day capture one aboard Cristo Beech, “This is just my third show with Cristo Beech. I am hoping to show him in the Saturday night Grands Prix before the winter circuit is over. Today was a step in the right direction.”

Vale and the 11-year-old Warmblood gelding easily navigated the course to deliver a clear first round, stopping the timers at 83.217 seconds.

The jump-off would be more challenging. Vale knew what he had to do to capture the fastest time in the jump-off, “The inside turn was on the edge of doable. I knew I wouldn’t be able to be faster than Derek [Petersen] without that inside turn, so I went for it.”

Vale and Cristo Beech advanced straight to the jump-off galloping from fence one to two in nine strides to quickly land right to soar over the double combination. “After the combination I was able to slide over to get enough of an angle where it would be a smooth turn back to the [MARS Equestrian] oxer. He’s pretty solid at single fences, even though it was a pretty big oxer, I knew if I was able to get the first part of the turn done smoothly, he would be able to jump it.” Vale and Cristo Beech soared through the rest of the course stopping the jump-off clock at 43.335 seconds, more than three seconds faster than second place.

Derek Petersen and his own Zechariah 3:9 (Zirocco Blue x Katrina)  earned second place honors in today’s $15,000 WEC Ocala 1.45m Jumper Classic. Petersen and Zechariah 3:9 have earned numerous top finishes at World Equestrian Center – Ocala in featured classes. Petersen and the eight-year-old gelding delivered a smooth and fast first round stopping the clock at 81.483 seconds, well within the time allowed of 87 seconds. The pair advanced straight to the jump-off, galloping through the entire course while taking the outside turn to the MARS Equestrian oxer, to stop the final timers at 46.556 seconds.

Rounding out the top three in today’s $15,000 WEC Ocala 1.45m Jumper Classic were Bryn Sadler and Showcase 81, LLC’s Catch The Dollar (Colmander x Unique XII). Sadler won last week’s 1.45m Jumper Classic aboard her other mount Cinven CR. Today, Sadler and the 14-year-old Holsteiner gelding produced a gorgeous first round, leaving all rails up to stop the clock at 85.543 seconds. The pair advanced to the jump-off rolling through the course, easily walking down the lines to stop the clock at 51.544 seconds to earn third.