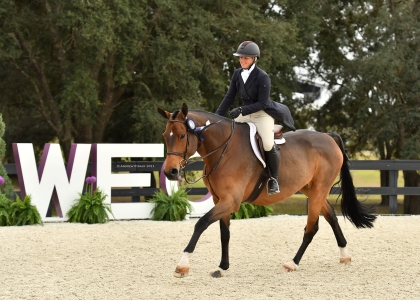 Wordley and Valentine Car first round effort produced a time of 65.544 seconds on the clock, well under the time allowed of 71 seconds. Wordley and the 13-year-old Warmblood gelding advanced straight to the jump-off, quick over the ground and with tight turns to stop the clock at 31.840 seconds.

Week IV of the Winter Spectacular Show Series showcased the $75,000 Coors Light Grand Prix brought to you by Cone Distributing Inc. under the sun during a chilly Florida day. Thirty-two competitive entries took to the WEC Grand Arena to vie for the win over tracks built by FEI Level II course designer, Colm Quinn (IRL). The track featured multiple combinations and a tight time allowed that caught a few riders throughout the class. Twelve entries navigated faultless first rounds and only four jumped double clear, but it was Olympic rider Santiago Lambre and his own Comtess 202 (Comme II Faut 5 x Parodie) that emerged victorious.

Lambre and the 11-year-old Westphalian mare went toward the end of the order, producing a faultless first round in 81.761 seconds.

“Comtess is a fantastic mare. I have owned her for about a year now. I won two grands prix on her last winter. She’s done a few four-star grands prix and I think she’s ready for a five-star. She tries hard with her hind end, is careful in the front and she is super-fast off the ground.”

Lambre watched a few other competitors jump-off to establish a plan, “It was nice being toward the end of the order. I was able to watch Will Simpson go, and he was very fast. I watched the few in the beginning go and they were fast but had rails. I made sure to wait and think coming to the last oxer because that rail came down multiple times.”

Lambre and the careful Comtess 202 started on a strong gallop, dashing from fence one to two. The pair flew through the double combination to slice the oxer in the middle. Lambre and Comtess rolled through the rest of the course, steadying to the last jump, leaving all rails up to stop the jump-off clock at 38.475 seconds.

The $20,000 WEC Ocala 3’6”-3’9” Hunter Derby saw seventeen stunning hunters try their hand at Doug Russell’s winding course, but it was Samantha Schaefer and her own In The Know (Arkansas x Cavelle) that that earned the victory.

Schaefer and In The Know navigated a gorgeous first round while jumping each high option with ease to earn a score of 91 from the judges. The pair delivered a faultless handy round, rolling through all of the turns while opting to jump the three high options to earn a score of 88, for an overall score of 179 for the win.

Twenty-nine stunning hunters took to Hunter 1 early on Friday morning to vie for the win over a winding track designed by Doug Russell. Scores soared into the 90s but it was Dorothy Douglas and Abigail Davenport’s MTM Exceptional (Casall Ask x Rheinsberg) that caught the judges eye.

Douglas and the sporty 13-year-old Holsteiner gelding navigated a gorgeous first round, jumping each fence in perfect form for a score of 90. Douglas and MTM Exceptional returned for the handy, delivering a seamless round, while jumping all three high options to earn the class’s highest handy score of 91 for a two round total of 181.

The $15,000 WEC Ocala 3’ Jr/Am Hunter Derby saw 23 horse-and-rider combinations compete for the top prize, but it was Molly Braswell and her own Jalisco that earned the highest overall score of 176 for the hunter derby win.

Lambre and the speedy 14-year-old KWPN gelding were the last pair down the ramp into the WEC Grand Arena to contest the $20,000 C. Jarvis Insurance Welcome Prix. The pair navigated a smooth first round leaving all rails up to stop the first-round clock at 75.818 seconds. Lambre and Dingeman advanced straight to the jump-off, rolling through the beginning of the winding track, leaving all rails up. The pair landed after the C. Jarvis Insurance double combination to gallop to the last oxer in nine strides, stopping the clock at 32.726 seconds, just a tenth of a second faster than second place.

Congrats to all entries on another successful week of equestrian sport! We hope to see you all soon for Week V of the World Equestrian Center – Ocala 2022 Winter Spectacular Show Series.