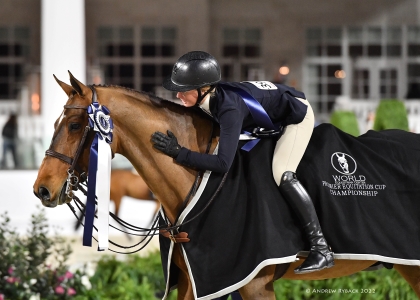 Santiago Lambre (BRA) and his own Comtess 202 proved unstoppable on Sunday morning in the $75,000 Adequan Grand Prix in the WEC Stadium.

“The Grand Prix at night, under the lights is always a bit more challenging because of the atmosphere and the jumps are always a bit spookier at night. Comtess 202 enjoyed the change of venue for today’s class. The Stadium is a fantastic ring and it’s always good to switch things up.”

Skylar Wireman drove away with a brand-new SUV after winning the WEC Premier Equitation Cup Championship, where she held rank during all three phases.

“I am so thankful to be able to ride Charisma in this class. He’s truly the best horse in the country. I knew I was going in with a reliable partner, so my goal was to just lay down nice, solid trips to put myself in the pack. I was sitting in top on the second round, which was super exciting, but I tried not to get a head of myself. Then going into the work-off I was able to see the challenges that other riders faced, so my goal was to stay consistent, and Charisma was right there with me.”

Twenty entries took to the WEC Stadium early Friday morning to compete for the top prize in the $15,000 WEC Ocala 1.45m Jumper Classic, but it was Willie Tynan (IRL) and Fenise (VDL Campbell x Wica Van De Hermitage) that posted the fastest time to snag the win.

Samantha Shaefer and Bonne Vie LLC’s Frasier had an anniversary win on Friday, in the $12,500 WEC Ocala 1.45m Jumper Classic.

“This is Frasier and I’s one year anniversary. This was the very first class I ever showed him in last year and he won. Same arena, same day and same results,”

Amanda Steege and Cheryl Olsten’s Lafitte De Muze were the best in the field in the WEC Grand Arena on Friday night, in the $20,000 WEC Ocala 3’6”-3’9” Hunter Derby.

“I have been super excited about competing in this class and actually had it planned in my schedule at the start of the year. To get to show in this ring with the hotel in the background, in this size and scope of an arena is incredible. The feeling of walking down the ramp into the Grand Arena, makes you feel so special and important.”

“Blue Monday is the best. We call him Blue at home. He is owned by an adult that doesn’t show. She just enjoys him and takes lessons on him. He just comes out to the shows for derby classes. He shows up on Friday, doesn’t need any prep and wins.”

“I really liked this handy. This ring is smaller which made for a lot more places to be neat. In the Stadium you can get so lost, it’s gorgeous, but very massive. This arena is perfect for handy courses.”

“I haven’t been to America in about five years due to COVID. I am from Australia, and we came over a few months ago, where we were based out of Wellington. We actually fly out tomorrow to head back to Australia, but we have heard nothing but amazing things about this place, so we had to come take a look. We brought [Alpha Activity], stayed in the hotel, won the 1.35m yesterday and won the Welcome today. The trip was more than worth it,”

Meegan Galloway and Rachael Lomel’s Woodlands Lightning Thief topped the $2,500 WEC Ocala Pony Derby, with a first round score of 82.5 and a handy score of 84, for a two round total of 166.5.

The $2,500 WEC Ocala Non Pro Derby saw the largest pool of entries, where there the class was split into two sections, Adult and Childrens.

The $2,500 WEC Ocala Non Pro Adult Hunter derby was captured by Judianne Slish and her own Asier S, besting 29 other competitors.