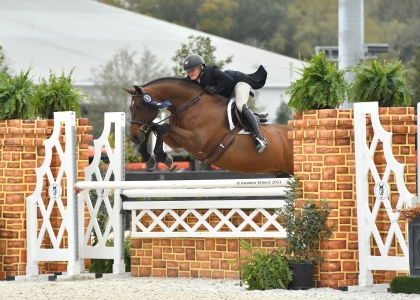 “The course rode hard enough. It was the end of a long week, we had two night classes this week and there were a lot of trips to go ahead of us. Leopoldo set amazing tracks, that were difficult and challenging. It was just technical enough to have rails in different spots.”

Santiago Lambre and his own Chacco Blue II emerged victorious in the $75,000 Florida Coast Equipment Grand Prix, besting 41 other competitors.

“[Chacco Blue II] is an incredible horse. He is actually blind in one eye. He wouldn’t know it because he has been blind in that eye since he was two,” said Lambre. “He just left quarantine. He was in quarantine for 40 days, where I rode him and jumped him. I just showed him in three classes, then we came to do the Grand Prix and won!”

Richard Spooner and his own Chatinus reunited for a victory in the $10,000 Buckeye Nutrition Futures Prix.

“This class means a lot to me because Chatinus has had four years off due to an injury. We have been bringing him back very slowly. He’s 15-years-old, so it’s kind of a resurrection with a very sweet victory. He’s an incredible horse. He went to the World Cup Finals. I only had him for seven months before he got injured, where we won a World Cup Grand Prix or two, then went to the World Cup Finals in Paris.”

“The jump-off rode really well. I tried to be as fast as I could and got a little bit of a long one into the double combination, but I think if I would have pulled, I would have had a rail. In the last line, my plan was to do seven, but I decided to stay on the safter side and ask for the eight.”

“I know Comissario so well at this point and he is so handy, that I took the risk for that turn. It rode beautifully because he landed on the right lead. I think if we were to go around, there was a greater chance that he would have to swap after the fence. Comissario made it easy.”

“Santana is great. He’s been with us for six or seven years now. He usually does the adult hunters with his rider, but when his rider isn’t here, I get to do him in the derbies.”

Jamie Auletto and her own Idolize were stars in the $15,000 WEC Ocala 3’ Jr/Am Hunter Derby, besting 34 other horse-and-rider combinations.

“Idolize has such a big, beautiful stride, he can just lope down the lines. When I walked this morning, there was a nine and an eight, but then I saw some riders do a nine and ten. So, the course was very adjustable.”

Sharn Wordley and his own Gatsby prevailed on Thursday afternoon in the $20,000 C. Jarvis Insurance Welcome Prix.

“Gatsby is particularly good at those types of turns. He can come up inside and turn up to a vertical in one stride. It’s his specialty, actually. I felt confident I could make up time in that turn. It walked a nine but, in the bend, I had to add one extra so he knew where he was going, and it worked out perfectly.”

The $2,500 WEC Ocala Non Pro Derby saw a large pool of entries, where there the class was split into two sections, Adult and Childrens.