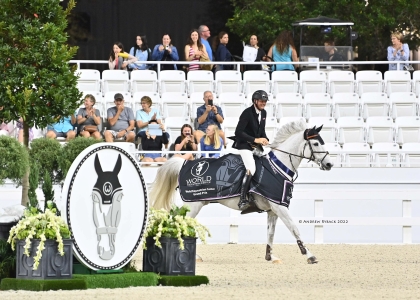 Santiago Lambre’s (BRA) hot streak continued with two featured class wins during Week VIII. Lambre and his new mount All In Horses Cava closed out the week with a win in the $15,000 WEC Ocala 1.45m Jumper Classic.

“The horse arrived on Wednesday. I showed him yesterday in the Futures Prix, where I had to make a circle because the bit wasn’t working for him. Today, I changed the bit and he was great. He was jumping the 1.50m competitively in Europe, so this is easy for him.”

“I just thought about going fast. I wasn’t trying to chase anyone because that never works out for me,” laughed Petschenig. “She landed and moved where everything was right there. I landed the combination and three strides after I saw one less and just went for it. It was really long but her scope is incredible. I just rode what I had at every moment in that jump-off.”

“My plan was to win. My wife won the 3’ Open Hunter Derby yesterday, so I had to keep up,” laughed Rinehart. “All of the times were right up there with one another, so I decided to do two less, and do the seven down the first line. I was a little concerned for the turn after, but Vincent was great, and stayed right with me.”

The $12,500 WEC Ocala 1.40m Jumper Classic hosted twenty horse-and-rider combinations vying for the win on Friday afternoon, but it was Santiago Lambre and his own Kind Of Magic that emerged victorious.

Samantha Schaefer and Madeline Schaefer’s In The Know  (Arkansas x Cavelle) stole the show, earning the highest overall score from the judges in the $20,000 WEC Ocala 3’6″-3’9″ Hunter Derby.

“When I first looked at the handy, I was wondering how it was going to flow, but it actually rode really well. There were a few places that made you think about your track, timing and rhythm. One jump would set up the next.”

“The courses were so much fun today. I don’t ride very much, and I have probably done four or five shows total since 2018, so coming out today was really nice. Now, I will go back into retirement until there’s another gorgeous day where I want to have some fun.”

“I enjoyed today’s courses because there weren’t many numbers. Tito [Balou Label] likes to jump high, so this was easy for him. I normally show him in the 3’6” A/Os but this is a long circuit.”

“The course was pretty technical. I think some people took fence one for granted. It was going into a short turn, and Hakini studied it. I got lucky to the line with the wall. I never jumped her over a wall before, so I overrode it a bit, but she was amazing and jumped right out.”

Jonna Wilks Murry and Ride Right LLC’s Roulette SSF earned top honors in the $2,500 WEC Ocala Pony Hunter Derby, earning a first round score of 82 and a handy score of 84 for an overall score 166.

Alyssa Ainsworth and her own Apparition conquered the $2,500 Non Pro Childrens Hunter Derby, besting 31 other entries.

Congratulations to all entries on a successful week of equestrian sport!