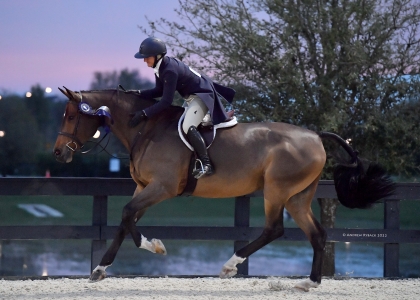 “I used his step for the jump-off. Once I picked up a canter to the first oxer, I knew the six was there. His stride is massive, so he can walk down those lines. I had to do the six to beat Santiago [Lambre],” laughed Tynan. “Once I got through the combination, I just stayed on the same canter, so I could use his step for the rest of the track. I probably left one or two out everywhere.”

“I started on a fast gallop to the first fence. I did one stride more than the other riders from one to two, but I was way inside everyone else’s track to the next vertical. My boot actually hit the standard, that’s how tight of an angle I was on. Then I was super quick to the oxer and the jump across the middle of the ring. After the double combination, I was just able to fly to the last one without hitting the brakes.”

“The time allowed was perfect for us. Cezarro is a smaller guy, he thrives off momentum. The faster I go, the better he jumps. I don’t ever have to worry about the time allowed with him, because he’s efficient across the ground and over the jumps.”

“I saw some riders before me do some tricky inside turns, but I thought it was better for him in this ring to just try and be smooth. I didn’t want to twist him around and take a risk, especially with the eerie storm weather heading our way. So, I focused on consistency and showing off his amazing jump.”

Jenny Miller and her own Aladdin prevailed in the $15,000 WEC Ocala 3’ Open Hunter Derby.

“Aladdin is my personal horse. It’s really amazing that WEC offer’s 3’ professional derbies because that’s all Aladdin does. He’s eligible as a first year horse, but he just shines in the derbies. I usually do a practice class on Thursday to get the spice out, then he comes to the derbies and has been knocking on the door.”

Fourteen-year-old Addison McQuaker and her own Golden Ticket bested a field of 50 horse-and-rider combinations in the $15,000 WEC Ocala 3’ Jr/Am Hunter Derby.

“I really liked the courses today. They were designed very well. I liked the trot jump and the turn to the hedge jump in the middle of the ring was very fun. The big oxer at the end of the course was also very fun. Golden Ticket was such a good boy today.”

“I stayed on a straight gallop after fence one to angle out of the line and angle back in from two to three because the four got very deep. The rest just flowed right along. It is crazy how many steps you can leave out in that ring. A lot of people did eight strides to the last jump in the first round, and I did the six in the jump-off. If you walked that line, and thought you could do the six there, you’re nuts. Then, you get to the jump-off and the horses just open up where it’s easy to leave that many out,”

Congratulations to all athletes on another successful week of equestrian sport!