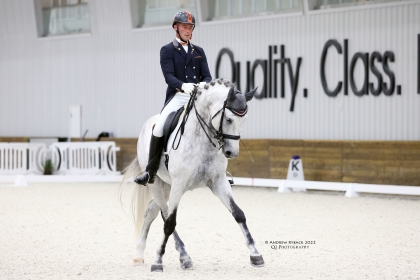 While riders proudly presented purebred horses from Spain, Portugal, Brazil and the United States, enthusiasts gathered to enjoy their beauty and athletic performances. All eyes were on the nearly dozen PREs and Lusitanos competing in the Prix St. Georges (PSG) division.

Kicking off the weekend was the first round of Challenge classes and an evening cocktail reception sponsored by Hampton Green Farm. Kimberly Van Kampen from Hampton Green Farm welcomed the group and led the presentation with an encouraging speech on the potential for the Iberian horse in sport. Lily Forado, a representative of the Spanish parent breed association ANCCE, described the services of the United States PRE Association, while JP Giacomini did the same for the Lusitano on U.S. soil.

After the presentations, the PRE horses of Hampton Green Farm set an exciting tone for the weekend. Attendees had the opportunity to learn several training points and exercises from international rider Maria Lithande, who gave a master class to PRE riders Kerrigan Gluch and Justine Boyer.

Ten pairs competed in the PSG Iberian Challenge to determine the title winner. The scores were very competitive at the top of the leaderboard, but Dutch rider Ivo Juhrend riding Leon de Matecana, an imported seven-year-old Lusitano stallion (Dragon Comando x Solar dos Pinhais), owned by Susan Kearns, stood out in the first round, clinching the win with two scores over 70% and a total of 142.059 points.

Kerrigan Gluch along with Hampton Green Farm’s stallion, Hermanito HGF (by Cuatrero IV), rode the FEI Five Year Old Preliminary and Final Tests. Two solid performances were enough to claim the title of champion with an overall score of 138.000 points.

Iberians have excelled for decades in international dressage arenas with Spanish and Portuguese riders, but they are also growing in popularity in the United States. More editions of the Iberian Horse Showcase Challenge will follow, and WEC will continue to showcase the breeds.

The national dressage show at World Equestrian Center – Ocala, held March 11-13, 2022, garnered entries at all levels, from USEF Training Level up to Grand Prix, with GAIG/USDF Regional Championship qualifying opportunities. The Dressage I show was sponsored by Hampton Green Farm and Discover Dressage.

Locally-based rider Jessica Howington — who only turned professional in 2021 when she and Cavalia were shortlisted for the U.S. Olympic team for Tokyo — scored a new career-high Grand Prix score on the 15-year-old mare to capture the top spot from nine starters in Friday’s class. Their 74.457% came from the Colombian international four-star judge Cesar Torrente. Anna Marek finished second with 69.239% on Fayvel, by ZiZi Top, while Howington appeared on the podium again, riding the Fidertanz x Sandro Hit mare Filipa into third with 66.522%.

Howington, who also won the Grand Prix Special on Cavalia with 71.489% on Saturday, said: “After both tests, I was so happy with her because she really kept fighting for me and wanting to give. Even though we had little, tiny mistakes. I’m so proud of her for being so kind; she gave me her heart, as she always does, and that’s irreplaceable.”

The 43-year-old spotted Cavalia, by Sir Donnerhall out of a Gribaldi dam, on Facebook three years ago, and then found herself in the same place as the mare a year later, so hopped on for a trial ride at Helgstrand Dressage in Denmark.

“It was like it was meant to happen; I rode her and fell in love,” said Howington. “She’d never done grand prix and neither had I, so we’re still both very new and green. We still have a lot to learn and a long way to go but she’s such a willing horse, and she really wants to work. Rides like I had this weekend make it worth every tear and drop of sweat.”

Cavalia will have an easier time over the summer — and Howington will be concentrating on the safe delivery of her two embryo transfer foals by Five Star in May — but longer term the pair have their eyes on the 2024 Paris Olympics.

Howington moved to CrownView Dressage, a farm just five minutes away from WEC, in May of 2021, and now has 60 horses on site. She trains with Andrea Woodard, who is based at Helgstrand Dressage in Wellington, FL.

“I cannot begin to say how much I love showing at WEC,” added Howington. “The facility is incredible, and there is not a single person who I talk to who doesn’t absolutely love being there. I’d love to see even more dressage and CDIs there. They did not miss a thing when they designed it.”

“I got him for training in October last year and this was only his second show at Prix St. Georges, so I was really happy with him,” said Juhrend of the approved stallion. “He doesn’t really have any bad parts; that’s the great thing about him. All the lateral work and changes are easy, and he has good basic gaits. The collection is easy for him, and his rideability is really good. Today was the third day in a row, so I could feel he was a little tired, but still he put in a lot of effort. There was a competition for the Iberian horses at this show — he was in the seven years and older section — so we had to do the Prix St. Georges and with three wins he won that challenge.”

“I started riding Black Diamond about 18 months ago, and it was all but impossible to canter a 20-meter circle,” said Juhrend, who logged two second places and a fifth with the horse. “He’s really talented and has the capability to go grand prix. He’s like a diesel — you start slow the first 10 minutes, but then he gets fired up and he’s good. I’m already looking forward to the next show at WEC. We’ll probably bring the same ones back, and maybe also the three grand prix horses that me and my husband have at home.”

Anna Marek had a busy weekend, riding 12 tests over the three days with six horses. She rode tests from Training Level all the way up to Grand Prix. Her highest score came courtesy of Fire Fly, Janet Similie’s 12-year-old gelding by Briar Junior, who claimed Saturday’s Grand Prix with 73.043%. Marek claimed five wins and six second places. Two of those wins came via Duvel at Intermediate I, as Cynthia Davila’s 14-year-old Florencio gelding scored over 71% in both tests to claim the blue ribbon.