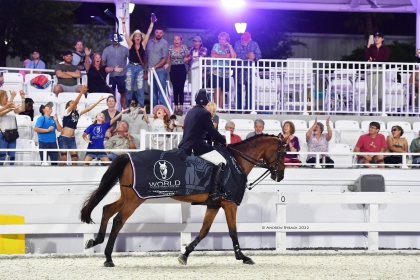 Watch the United States and Brazil battle it out in the $100,000 Coors Light National Grand Prix jump-off during World Equestrian Center – Ocala’s 2022 USEF Summer Series. Aaron Vale (USA) and Santiago Lambre (BRA) race head-to-head in the jump-off where Aaron Vale and Prescott navigated a tight turn to take the victory.

“I watched Santiago’s round on the screen in the schooling arena. I really thought that he had won the class already. There weren’t any other strides to leave out and he found ever single fence going forward. Even though I thought he might have it, I am never one to let that stop me from trying.”

Kayla Benney (USA) & Doki Du Loret were the only partnership to put forth a double-clean effort to secure the top prize in the $10,000 Buckeye Nutrition Futures Prix.

“I purchased him off a video from the Czech Republic three years ago on a whim. He was six when I bought him, and the plan was to eventually sell him. I ended up speaking to my business partner, Dawn Willey asking if we could keep him because I thought he can do the grand prix. I never had my sights set on doing grands prix until I sat on him. The rest is history.”

“I wanted to be smooth. I knew my first-round score was good enough, so I didn’t want to do anything too risky. Stefano told me to just stay focused, which simply means don’t change anything.”

“Many riders started going right to right, but I figured with a left approach, he would jump and land left, making the inside turn much smoother,” said Douglas. “I had a few points to make up, so I opted to take a few tidy inside turns that would show him off. I know the horse so well at this point, I know what track would suit him the best.”

“I made a few little mistakes in the first round, so Mark Jungherr said I had nothing to lose. I did every single inside turn that the course offered. C-Star is so brave and dead honest, as soon as I point him at a fence, he is going to go no matter what.”

“Cetano had off last week because he did so well the week before. He is a hot horse, so he usually does well the more he goes, but today, he felt super.”

Aly Orseno and her own Best Mate claimed the $2,000 WEC Ocala Pony/ Children’s Pony Hunter Derby victory with an overall score of 161.

The $3,500 WEC Ocala 2’6” Non Pro Derby was taken by Amelia Gallagher and her own Emerald City, besting 23 other competitors.

Congratulations to all competitors on another thrilling week of equestrian sport!