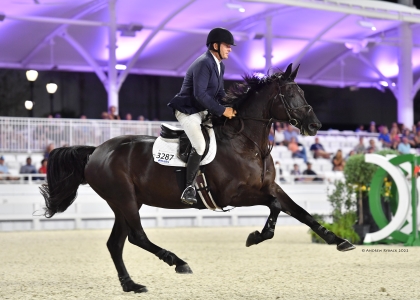 Week VII of World Equestrian Center – Ocala’s 2022 USEF Summer Series featured another full week of top competition with a spate of elite athletes taking home the lion’s share of the prize money in our featured classes. Jad Dana kicked off the week with a win in the $30,000 C. Jarvis Insurance Welcome Prix, aboard After Eight. Daniel Geitner and Vesta De Lavardin galloped away with the $100,000 MARS Equestrian National Grand Prix victory on Saturday night, besting a competitive field of 47 starters. Read on for additional highlights from Week VII.

“I was lucky to have a horse go earlier in the jump-off, so I knew what striding I was going to take with Vesta De Lavardin,” Geitner said. “I did one less to the Lugano oxer and one less in the last line than I did on my earlier horse. This mare is also very fast in the air and across the ground. She wastes no time.”

“I have had Forman De Virton for a while. He was off for about a year with a small injury, but thankfully he came out just fine. He always jumps his heart out and tries his best. He’s a kind-hearted horse that loves to be in the ring.”

Dorothy Douglas and Abigail Davenport’s MTM Lolah LOL rose to the top of the leaderboard with two consistent scores in the $12,500 WEC Ocala 3’6”-3’9” Hunter Derby.

“I saw Jake Evans do the inside left turn to fence one and Lolah does very well off the left lead, so I knew I was able to make that turn. For the remainder of the course, I wanted to stay smooth, tidy and do a few different angles to show her off. Lolah loves a challenge and when she has a good one, that’s when she shines.”

“Goldfish was really on it today. I was able to really gallop the hand gallop fence, which I think we got bonus points for and then he was perfect over the trot fence. He answered everything I asked from him, and he landed on every lead.”

“Fitz has been amazing. He’s been champion almost every week in the Amateur Owner Hunter division,” said Harbour. “I really enjoyed the course today; it was different from any other course that we have done so far. Fitz was forward and was able to really open up his step.”

Jad Dana (LBN) and Springhill Farm 1850, LLC’s After Eight stepped on the gas in the $30,000 C. Jarvis Insurance Welcome Prix to steal the victory.

“I knew it was a quick jump-off where you had to be fast every step of the way in order to beat the rest, so I started out strategically and caught the first fence on a angle so I could land right. Then I just tried to stay on a gallop, until I had to take the inside turn to the in-and-out. After I was clear out of the double, I did a nice seven to the vertical then tried to go as fast as possible to the last oxer and it paid off!”

“I watched the current leader, Luis Biraben and he went very fast, so I knew the only way to catch him was to go flat on and the mare was right with me.”

Elle Sievert of Dallas, Texas and her own Back In Black secured an overall score of 148 for the win in the $2,000 WEC Ocala Pony/ Children’s Pony Hunter Derby.

Congratulations to all athletes on another great week of equestrian competition!