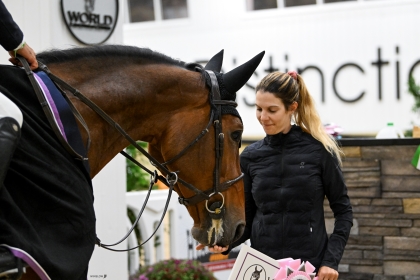 Santiago Lambre (BRA) and his own The Diamant Rose Z won the $50,000 WEC – Wilmington Grand Prix.

“I sold her after the winter circuit, but she is a bit tough to ride so I just got her back and have been riding her for only a few weeks. I am excited to show her more this winter.”

“Niki Martin and Ron Caraway are both fantastic owners. I am so happy to be able to deliver great rounds on both horses. My wife won the 3’ Open National Hunter Derby yesterday, so it’s great to keep the hot streak going.”

“MTM Bentley is an amazing horse. David [Beisel] has helped me a lot with him. Lori [Taylor] is a super supportive owner. She let me practice a bunch last week so we were well prepared for today.”

Catherine Rinehart and Hero were victorious in the $10,000 USHJA National 3′ Open Hunter Derby.

“I am a little better off the left lead, so I decided to come to fence one on a nice left bend so I could take the inside turn to the cornstalk fence. I think it might have brushed his belly, so he got a little quick for a few steps but then came right back to me.”

“Turtle [Donatello] is perfect. When his owner Addison isn’t here, I get the opportunity to show him. He’s so much fun and a fantastic horse. Once you get him in a rhythm, he will just carry and walk you down the lines. It’s the best feeling.”

“He’s been surprisingly fresh here. I have been riding him for about a year, so I am unsure how much he’s shown inside. He was pretty amped yesterday, but luckily, we got a paddock here, so I was able to throw him out for a few hours this morning.”

Congratulations to all entries on a successful first week of showing!