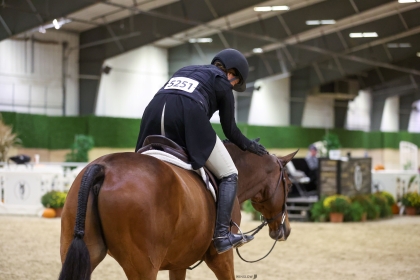 Santiago Lambre and his own Comtess 202 stole the victory in the $75,000 WEC Grand Prix by three tenths of a second.

“I started slow in the beginning [of the jump-off], but I was tidy everywhere. Then I went as fast as I could to the last fence. The distance was long, but Comtess kept it up.”

Izzy Beisel and Diaz Barbotiere dominated the $10,000 WEC Futures Prix by landing a jump-off time that was four seconds faster than second place.

“I was talking to my dad [David Beisel] last night on our way home and I told him I was early in the order, he said to make the rest of the class chase me, so that’s what I tried to do.”

Tammy Provost and Brenda Christenson’s All In captured the top prize in the $10,000 USHJA National 3′ Open Hunter Derby. The pair earned scores of 88.5 and 91.

“We have had him for many years. I started him in the 3’ Pre-Green Hunter division and he’s been my most dependable horse ever since. He doesn’t do anything wrong. If something happens, it’s the rider’s fault. He knows his job and wants to be perfect.”

“My trainer and I decided that the left approach would be the better option for us, because it would give me more time to find a good distance to the first fence. Then, my goal was to stay smooth and not do anything too risky because I was already on top.”

“I planned to do the same track with Ivaro N that I did on Sovereign, but I wasn’t sure if I was going to go as fast. As soon as I picked up a gallop to fence one, I knew Ivaro N was all about speed today. I went a bit quicker from one to two on Ivaro N because I think that’s where I was a touch slow with Sovereign. Then I asked for a very tight turn after the dark blue vertical and Ivaro N was right there with me.”

Sophia Johnson and her own Gold Crush captured the $2,500 Pony/Children’s Pony Hunter Derby with an overall score of 145.

Congratulations to all competitors on another successful week of hunter/jumper competition!