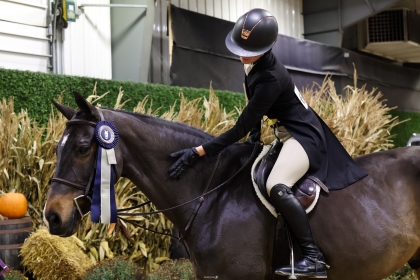 For the third week in a row, Santiago Lambre (BRA) was victorious in the $75,000 WEC – Wilmington Grand Prix this time aboard his own Chacco Blue II.

“It was a fast class so I knew I was going to have to be as quick as possible. [Chacco Blue II] has a big step so he covered a lot of ground quickly, and I was very tidy back to the vertical after the double combination.”

“Justice is a special horse. I actually rode her mom in some of the biggest classes I’ve ever done. We ended up having to stop showing her at a young age because of a cyst so we decided to breed her. Justice was one of her first foals, and I have been riding her ever since she was four years old.”

“He has always been a laid-back horse but with an electric jump. He has the knack and wants to win. The bigger the stage, the better. He always rises to the occasion and never shrinks under pressure.”

Havens Schatt and Concent were victorious in the $10,000 USHJA National 3′ Open Hunter Derby.

“We purchased Concent last year for a client of mine. She has been riding him at home and I’ve been campaigning him. Currently, we have been showing in the derbies and in the 3’6″ Greens.”

Elyse Jeschelnig and her own Leonti emerged victorious in the $10,000 USHJA National 3’ Non Pro Hunter Derby after securing an overall score of 160 from the judges.

“I really enjoyed the course today. I was able to ride a similar course earlier in the day, so I had an idea how the jumps rode out of the turns. During the first round of the handy, I wanted to keep a consistent pace and stay smooth.”

“I have had him for four years now. I purchased him as a project, and it took me a good amount of time to learn how to ride him. He’s pretty quirky and opinionated. He likes a certain way of going, so I had to step up to the plate and learn how I could help him,” Brewer said. “I finally started to figure him out this year and now I couldn’t imagine jumping big tracks without him.”

Congratulations to all entries on a successful series! We look forward to having you all back soon for the 2022 Midwest Indoors Series.