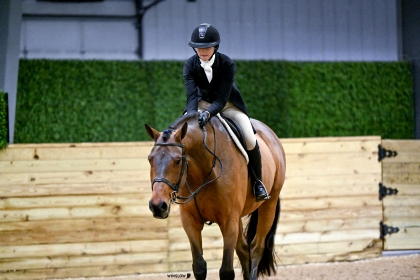 Wilmington, OH – A variety of incredible horse-and-rider pairs made their way to the winner’s circle to wrap up the first week of the 2022 Midwest Indoor series. Richard Reinhart earned first and second place honors in the $30,000 World Equestrian Center Grand Prix. Tammy Provost also earned her place in the spotlight after securing first and second place in the $10,000 USHJA National Hunter Derby 3’ – Open.

Richard Reinhart (USA) was nothing short of unstoppable in the Sanctuary. After earning top places in the 1.35m classes early in the week, he wrapped up the week with a win in the $30,000 WEC – Wilmington Grand Prix aboard Ron Caraway’s Vincent. He also earned the red ribbon with Diane Master’s Light Show.

Kevin McCarthy (IRL) is no stranger to the winner’s circle in Wilmington. McCarthy captured the win in the $10,000 Futures Prix aboard Jadina, an 8-year-old Dutch Warmblood mare owned by Sweet Oak Farm. The new mount for McCarthy proved to be a promising young talent in the sport.

Vanessa McCaughley and her very own Capitol Hill snagged the win in the $10,000 USHJA National Hunter Derby – Non-Pro. The 11-year-old Holsteiner gelding carried McCaughley to their first derby win together earning two over fences scores of 90 and 92 for an overall score of 182.

Congratulations to all entries on a successful start to the 2022 Midwest Indoors Series! We look forward to having you back for the second week of competition.