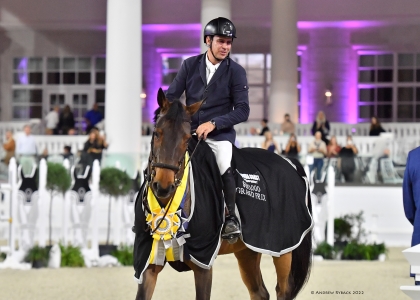 “Today, I had my game face on. I showed on Wednesday, but it was a bit sticky, so I felt like we needed to step up our game today, especially with today’s competitive class.”

Santiago Lambre (BRA) and his own Cetano Van Aspergem Z scored their second victory of the week in the $100,000 Florida Coast Equipment National Grand Prix.

“I didn’t want to go too fast to the double combination, but I had to take the risk and not add a step. I didn’t have the best approach to the last fence, but I couldn’t hit the brakes or else I wouldn’t have been able to win. Sometimes you have to go with your eye and stray from your plan.”

“Zechariah has been a great horse for me. It has taken me some time to figure him out because I have never ridden a horse so powerful. I have learned so much and love showing him.”

“Starfighter is the best hunter derby horse. This is the only class he ever shows in. He doesn’t need any prep. You take him out of the field, show up and win. Then he knows he gets to go get turned out when he gets back home. It’s the best life.”

“I made a mistake in the first round and had some points to make up, so I knew I was going to have to take some risks,” said Clayton. “I decided to go inside after jump two and stay as tidy as I could everywhere else.”

“This was my last show as a junior, so I couldn’t be happier with the result. I had no expectations going into the class today, I just wanted to have a good round, and if I was able to make it in the top 12, I would have been happy,” laughed Moore. “I am so happy to end my junior career on such a high note and this happened to be my first derby win ever. I am so proud of King.”

“I wanted to be tidy and quick. There were a lot of inside turns in the jump-off, and ‘Cetano’ is very careful, so I knew he would easily be able to navigate the inside turns. I think I was a little too tidy to the blue vertical, but it worked out nicely.”

Congratulations to all entries on a successful first week of national competition!