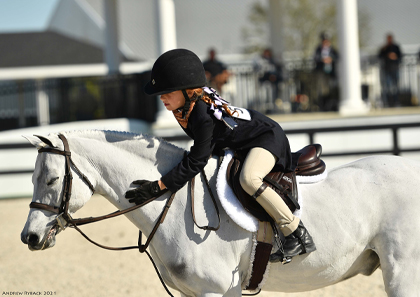 Another thrilling week of the World Equestrian Center — Ocala Winter Spectacular is in the books. Week 4 of the Winter Spectacular brought recurring victories for several riders and special new prizes in the hunter derbies to reward sportsmanship, style and turnout.

Feature class action for Week 4 of the World Equestrian Center — Ocala Winter Spectacular 2021 kicked off on Thursday with 36 entries vying for the top prize in the $20,000 Welcome Prix 1.45m. Fourteen entries advanced to the jump-off with five jumping double clear, but none could best Mexico’s Santiago Lambre and his own Comtess. Lambre and the 10-year-old mare delivered a clear first round with ease in 83.107 seconds, then continued straight to the jump-off. The duo gave the course their all, galloping between fences and hugging the inside track. Lambre and Comtess sped through the timers at 38.339 seconds with all rails up to ultimately win the class.

Derby Friday saw three competitive hunter derbies in the Stadium. Samantha Schaefer and Madeline Schaefer’s In The Know (Arkansas x Cavelle) took another win in the $20,000 WEC Hunter Derby 3’6″ – 3’9″. The duo also won Week 3’s $20,000 WEC Hunter Derby 3’6″ – 3’9″ and were on-form again on Friday. Schaefer and the 11-year-old Warmblood gelding laid down a flawless first round for a score of 92. The pair returned last in the handy round, taking inside turns and demonstrating their technical skills, earning a second score of 92 for a total score of 184 for the win.

Samantha Schaefer also found success in Friday’s $15,000 WEC Derby 3′ Open aboard R&R Hunter Horses, LLC’s Caristo (Casall x Bordeaux), taking 1st place against 25 entries. Schaefer and the 7-year-old Holsteiner gelding delivered a lovely first round for a score of 92, then wowed the judges with a spectacular performance in the handy round, earning a score of 94, totaling 186 for the win. Schaefer also took 6th place in the class aboard her own Checkmate (Cassini II x Cornancer) with scores of 86 and 87.5.

Isabel Harbour and IMH Equine, LLC’s Fitz (Numero Uno x Kootje) topped a competitive field of 19 entries in Friday’s $15,000 WEC Derby 3′ Non Pro. Harbour and the 13-year-old Dutch Warmblood gelding delivered a fantastic first round for a score of 87, then returned with identical style in the handy round for a score of 88, brining their total score to 175 to ultimately take the win. Harbour also took 4th place aboard IMH Equine, LLC’s G. P. Burdell, earning scores of 76 and 84 for a total of 160.

The prestigious Style of Riding Award was presented to Alliy Moyer in Friday’s $15,000 WEC Derby 3′ Non Pro for her classic style and her sportsmanship. The Style of Riding Award is generously donated by Bill Rube to be awarded to the rider who best displays the American Style of riding in the ring and sportsmanship outside of the competition arena. The recipient serves as a role model for preserving the integrity and tradition of equestrian sport. “This award is very special to me because the recipient of this award pays it forward both in and out of the show ring,” says Rube. Moyer received an elegant leather duffel bag and wore a white rose corsage on her lapel throughout the handy round to signify her achievement.

Sally Stith-Burdette, Director of Marketing for Shapley’s, was on hand during Friday’s $15,000 WEC Derby 3′ Non Pro to present The Shapley’s Champion Groom Award to Haleigh Landrigan, groom of 9th place finisher Skorekeeper (Casall), for the best turnout in the class. Shapley’s is a proud sponsor of the World Equestrian Center and is thrilled provide an award each week of the Winter Spectacular to the groom of the best turned out horse. Landrigan received a Shapley’s Award Bucket for Skorekeeper’s stunning turnout.

Aaron Vale notched his third win in the $75,000 WEC Grand Prix 1.50m on Saturday aboard Sleepy P Ranch LLC’s Major (Carmargue x Pinot). The duo bested a field of forty-three international entries for the win. Vale and Major have found great success in the $75,000 WEC Grand Prix this winter, taking 2nd place Week 1 and 3rd place Week 2. On Saturday, Vale and the 13-year-old Danish Warmblood gelding jumped a clear first round in 76.761 seconds, well within the time allowed of 79 seconds, securing a spot in the jump-off. Returning last in the order on the short course, Vale and Major picked up pace and stuck to the inside track, and flew through the timers at 40.470 seconds for the win in the class.

Saturday’s $7,500 Futures Prix 1.40m included a field of 39 competitive entries. Nine entries advanced to the jump-off with six managing double clear rounds, but none could catch the duo of Hanna Toering and her own Balou Moon BHF (Balou Du Rouet x Coquette BHF). Toering and the 11-year-old Hanoverian mare took their time in the first round, making sure to leave all rails up in 88.096 seconds. They advanced straight to the jump-off, surging forward and hugging the inside track to each fence. Toering and the fiery mare blazed through the timers at 36.803 seconds, moving into the top spot to ultimately win the class.