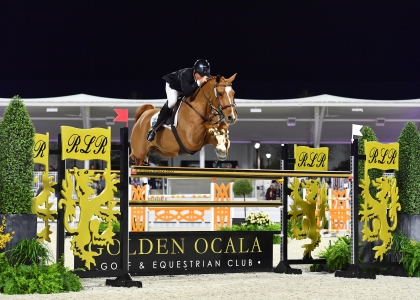 Ocala, FL – The WEC Grand Arena hosted an exhilarating Saturday night grand prix as 33 entries vied for the win in the $75,000 Golden Ocala Golf & Equestrian Club Grand Prix. The challenging tracks for Week I’s Saturday night grand prix were designed by Bobby Murphy. The track featured a tight time allowed, a tricky triple combination and The Equestrian Hotel wall. Six horse-and-rider combinations managed a clean first round, and only two jumped double clear, but it was Aaron Vale and Thinks Like A Horse’s Elusive that captured the top prize.

Aaron Vale is no stranger to World Equestrian Center – Ocala, bringing home nine Grand Prix wins in 2021. “Today, was a great start to the season. Elusive won the inaugural Grand Prix last winter and was given the first iconic NSBA horse head trophy. It’s so exciting to start the season off with another win.”

Vale and Elusive (Rodrigoo x Alouette) were the second pair on course, delivering a fast and smooth first round stopping the clock at 82.839 seconds, well within the time allowed of 85 seconds. “The course today was challenging. The time allowed was just short enough that you had to keep moving. The jumps went up to 1.50m, so it’s a little bigger than the summer. It asked some challenging questions from the start; the wall jump was fence number three which is quite a spooky fence. So that fence caught a few out, the combinations caught some horses and the tight time caught some riders, but that’s what a course is supposed to do.”

Vale and the 13-year-old Dutch Warmblood gelding were the first pair to return to the jump-off. Vale’s focus wasn’t on the number of strides between each fence, “Normally, I am really on the numbers, but in this jump-off the jumps were so far apart, and I was a little pressed for time so I wasn’t able to walk the strides in the jump-off like I normally do. My plan was to just go fast and not pump the breaks.”

Vale and the scopey Elusive started on a strong gallop, slicing fence one to soar to fence two in 11 strides. The pair quickly turned back to the double combination where they landed right and soared to the orange skinny vertical in 12 strides. The pair walked down the seven and galloped to the tall pink vertical in 11 strides. Aaron and Elusive swiftly turned back and streamlined to the Golden Ocala Golf & Equestrian Club oxer where they landed left and took a tidy inside turn to the last vertical, stopping the clock at 49.906 seconds, a time that no other competitor could best.

Australia’s Lauren Balcomb and her own Verdini D’Houtveld Z (Verdi x Laska III) were the only other pair to manage a double clear ride. Balcomb and the extremely careful Verdini D’Houtveld Z delivered a thrilling first round, jumping to the top of the standards of each fence to stop the clock at 84.695 seconds, just within the time allowed of 85 seconds. Balcomb and the 11-year-old Dutch Warmblood gelding returned for the jump-off, taking the left approach to fence one to gallop in 12 strides to fence two. The pair swiftly rolled back to the double combination, jumping it with ease to turn right to the diagonal line. They soared through the rest of the course, not touching a single rail to stop the jump-off clock at 57.975 seconds, which ultimately earned Balcomb and Verdini D’Houtveld Z second place.

Third place was taken by Balcomb’s husband, Sharn Wordley. Wordley is another familiar face at World Equestrian Center – Ocala earning numerous Grand Prix wins and top three finishes. Worldley and Fernando Cardenas’s Valentine Car (Son of Juan Car x Sofia Car) delivered a superb first round, easily navigating through the course to stop the first-round timers at 83.226 seconds. The pair returned for the jump-off, galloping from fence one to two in 11 strides. Wordley and the quick 12-year-old Warmblood gelding landed left and soared to the double combination, where they had an unfortunate rail at the (A) element of the combination. The duo flew through the remainder of the course, to stop the clock at 51.492 seconds, with just one rail down.

An additional $5,000 was awarded to the fastest four-faulter of the $75,000 Golden Ocala Golf & Equestrian Club Grand Prix. Australia’s Rowan Willis and Ekita Eindeken Z received the award with an incredibly fast time of 78.341 seconds with one down.

Camille Maddrix and Jack Straw received the $5,000 ‘Luck of the Draw’ award.