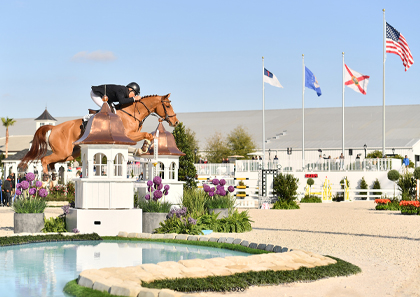 The course for this afternoon’s $75,000 WEC Grand Prix 1.50m featured 16 jumping efforts including a double combination, a triple combination and a liverpool. First to contest the course was Aaron Vale aboard Thinkslikeahorse’s Elusive (Rodrigoo x Alouette). The pair took several top placings in grands prix across the eastern United States in 2020 and were on their game for this afternoon’s class. Vale and the 12-year-old Dutch Warmblood gelding were quick and clear in a time of 82.161 seconds, well under the time allowed of 86 seconds, securing the first spot in the jump-off.

Aaron also claimed a jump-off spot aboard Sleepy P Ranch LLC’s Major (Carmargue x Pinot). The duo has also taken several top placings in grands prix across the eastern United States in 2020, signaling that they would be tough competitors in this afternoon’s class. Vale and the 13-year-old Danish Warmblood gelding were careful in the first round, leaving all rails up in a time of 84.970 seconds.

Among the eight competitors advancing to the jump-off were Fernando Cardenas and his own Quincy Too (Quartz Adelheid Z x Pixie des Hayettes). The pair earned several ribbons in grands prix across the southeastern United States in 2020, preparing them well for this afternoon’s class. Cardenas and the 11-year-old Zangersheide gelding jumped clear in the first round in 85.859 seconds, just under the time allowed.

Eight entries returned for the jump-off with Vale riding first aboard Elusive. With no available inside turn options to shave off time, Vale and Elusive shot into a full gallop between each fence. The pair flew through the timers, leaving all rails up in a time of 40.570 seconds, which would prove unbeatable. Cardenas and Quincy Too returned later in the order with the same game plan. While they jumped clear, they were still two seconds behind Vale and Elusive, stopping the clock at 42.642 seconds and sliding into second place. Vale then returned aboard Major, again taking to the course at full speed. The pair crossed the timers at 42.520 seconds, moving into 2nd place by two-hundredths of a second, leaving Vale and Elusive on top and bumping Cardenas and Quincy Too to 3rd place.

Vale of Thinkslikeahorse in Williston, Florida, stuck around after the class to chat with us about his 1-2 victory, “The rides were very good. There were a few very fast riders in the class. Elusive is very competitive and has won quite a few grands prix in the last year. My plan was to just go as fast as he could go, and same with Major. When the order came out yesterday and Elusive was first, I was a little disappointed because he is my best horse. In spite of that, it all worked out. Being a local to Ocala, I was thinking that it would be a little extra special for me to win the first grand prix at World Equestrian Center — Ocala. No matter the success I have in the future, I can always say that I won the first grand prix at World Equestrian Center — Ocala.”

Vale described both of his mounts, “Elusive is like a pet. My wife and I have both shown him. I bought him early in his 6-year-old year, so we’ve has him for six years now. He’s won a bunch with both of us. I hope for my daughter to inherit him one day. He’s a special horse in our family. Major is a horse of Don Stewart’s and is for sale. I’ve had a lot of success on him over the past few years. He seems to like this arena, so I hope to ride him a bit longer.”

He also shared, “I’m local to Ocala. I’m originally a Texan, but I’ve shown in Ocala for more than 30 years and have been a permanent resident for 15 years. I can’t believe that this has been built here for us to show our horses. I’m 52 years old and I’ve never dreamed about a horse show in my life, but every day that I go home from World Equestrian Center — Ocala, I dream about it all night. I smile all day when I’m at the show, too. It’s unbelievable; it has got to be the premier facility in the world.”

The $7,500 Futures Prix 1.40m saw 24 entries vying for the win over a course that featured 14 jumping efforts including two combinations. Ireland’s Christina Kelly and her own Kingdom (Lux Z) stole the win near the bottom of the order with an impossibly quick jump-off, besting 2nd place by more than three seconds.

Fernando Cardenas found great success in the $7,500 Futures Prix 1.40m, as well as the $75,000 WEC Grand Prix 1.50m, taking 2nd and 3rd place aboard his own Queenie (Quidam de Revel x Cobblestone) and Madeira SCF (Diktator van de Boslandhoeve x Lilli Marlen). Cardenas was first in the order aboard Madeira SCF, setting the bar high with double clear rounds. Cardenas and the 8-year-old Belgian Warmblood mare were conservative, but kept all rails up in the first round in 87.288 seconds. The pair continued straight to the jump-off, picking up pace and taking the inside track to fences 8 and 11. They stopped the clock at 46.010 seconds with a second clear round.

Cardenas and Madeira SCF remained atop the leaderboard before he returned aboard his second mount, Queenie. The duo were faster in the first round, jumping clear in 85.255 seconds. Cardenas and the 11-year-old Warmblood mare advanced straight to the jump-off, keeping their speed and mirroring Cardenas’s previous inside turns. They crossed the timers at 45.953 seconds, moving into the top spot.

Kelly and Kingdom took to the course near the bottom of the order. The pair was fresh off of several top placings in 1.20m and 1.30m classes last month and was prepared to step up to the 1.40m this afternoon. Kelly and the 13-year-old Irish Sport Horse Gelding navigated one of the quickest clear first rounds in 84.117 seconds, then continued straight to the jump-off. The pair also chose the inside track and raced through the timers at 42.122 seconds to steal the win, moving Cardenas to 2nd and 3rd place aboard Queenie and Madeira SCF, respectively.

Kelly of Double C Ranch in Ocala, Florida, took a few minutes to chat with us ringside about her win, “It was his first big class back. I had him a few years ago and he was my grand prix horse, then he was sold. He came back to me and I’ve been playing around with him and moving him up slowly. Today was his first big test, so I was pretty impressed with him. I’m so happy that he’s back and I’m excited for our future.”

When asked about her plan on course Kelly laughed, “I wasn’t really going for this outcome, I was just hoping that he was going to jump around. He jumped great the other day and we moved up slowly from the 1.25m to the 1.35m, then did the class today. Not many people had gone clear, so when he jumped clear in the first round I was happy. I get kind of competitive, so we really went for it in the jump-off.”

Kelly gave us some insight on Kingdom’s personality, “He’s a big, temperamental Irish Sport Horse. He has to go his own way, so I just let him be how he is. If you keep him happy, he jumps like he did today. He is 13 years old this year, but he hasn’t done a ton, so I’m hoping that he’s going to do some big classes again.”

She also added, “I’m originally from England and I ride for Ireland. I’ve been in the U.S. for a while now, though. Our farm is Double C Ranch. We have a farm here in Ocala and we’re planning to base at World Equestrian Center — Ocala for the circuit. It’s so nice here!”