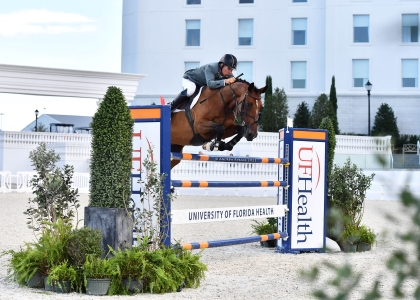 Ocala, FL – The penultimate Saturday night grand prix during the 2022 USEF Summer Series at World Equestrian Center – Ocala attracted spectators near and far. The night was filled with thrilling equestrian sport as an international list of top-level competitors competed for the lion’s share of the prize money in the $100,000 UF Health National Grand Prix. At the end of the night, Aaron Vale secured his second victory of the week aboard Lori Osterstock’s I. Adermie R 4 (Den Ham Blue R x W.Adermie 1).

Forty-three starters representing 14 different countries competed over a complex track built by Doug Russell (USA), an FEI Level II course designer. The course proved to be difficult with a challenging triple combination and tight time allowed, but an even eight found the key to a clean round. Of the eight, only three partnerships representing the United States, New Zealand and Ireland were able to yield a double clear effort.

Luis Sabino Goncalves and Sigma Stables LLC’s Vick Du Croisy were the first pair to try their hand at the short course. The pair flew around the track in 34.798 seconds, but fell victim to the last rail down.

Aaron Vale and the nine-year-old Warmblood mare were the next pair in, “Luis rode what I walked, and he was fast. I knew going in I had a few fast ones after me and I was hoping to mimic his round, but I added one more step from one to two. Other than that mess up, I was right on the rest,” told Vale.

“I did ten to the double. I was eight back to the UF Health vertical, and I don’t remember what I got to the next oxer, but we got there a bit long, so I had to do the eight to the orange vertical. I landed left then got to the last jump pretty quickly.”

Vale and I. Adermie R 4 flew through the timers, leaving all rails up to stop the jump-off clock at 36.021 seconds, which was unbeatable.

Vale gave his kudos to tonight’s course designer, “It was a great, fresh course. The time allowed was tight enough where you had to be smart, and the jumps were set in places that they have never been before. It offered some challenging questions in some tricky places, but from a course designer’s perspective, it was a perfect course with eight clear.”

The second fastest double clear ride was found by Sharn Wordley (NZL) and his own 18-year-old Irish Sport Horse stallion Gatsby (Simba x Daisy Cruise). Just last week, Wordley earned first and third place in the grand prix with Gatsby earning the third place spot.  This week, the pair continued on their successful streak with a very quick jump-off in 36.573 seconds, just five tenths of a second behind the winning pair.

Tom Foley (IRL) and Sher Al Farm’s Idalgo  (Catoki x Quidam’s Olgam) were the last pair down the ramp to compete over the short course. Foley and the nine-year-old Dutch Warmblood gelding soared around the track, stopping the timers at 36.741 seconds with all rails up to slide into the third place spot.

William Simpson received the fastest four-faulter award aboard his own Chacco P in the $100,000 UF Health National Grand Prix with a very quick time of 75.567 seconds, with one rail down.

Vicente Guillen was awarded the $5,000 ‘Luck of the Draw’ award.