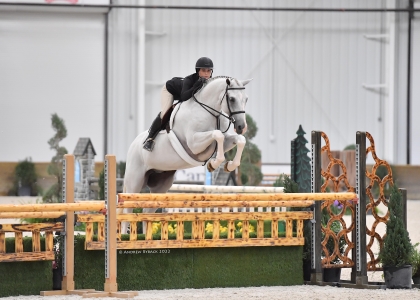 Taylor Ann Adams and Donald Stewart’s Starfighter snagged their second consecutive win the $12,500 WEC Ocala 3’6”-3’9” Hunter Derby. “He is the best type of hunter you could have. I haven’t done anything with him since last week’s derby, he just shows up and wins.”

Adams and the 10-year-old Hanoverian gelding created a gorgeous first round to earn the class’s highest score of 90.

Adams is very grateful for her business partner Colin Savaira, “If it weren’t for Colin, I wouldn’t be able to compete. Colin is my voice of reason and really helps with my confidence.”

Adams and Starfighter were the last pair to return for the handy, “I was on top, so my goal for the handy was to take the low options and be safe, but Starfighter locked onto all of the high options, so I just stayed out of his way,” laughed Adams.

The pair created a smooth track to secure a score of 87 from the judges for a two round total of 177.

Twenty stunning hunters competed over an open track designed by Pat Muskus, but it was Tracy Fenney that scored both the first and third place finish in the $10,000 WEC Ocala 3’ Open Hunter Derby.

Fenney and the talented nine-year-old Warmblood gelding MTM In the Moment produced a lovely first round to earn a score of 87.5.

Fenney and MTM In The Moment also earned last week’s victory in the $10,000 WEC Ocala 3’ Open Hunter Derby, “He is really showing that he was meant to be a hunter,” said Fenney. “He will go do the Incentive Hunter Finals in Kentucky and if I still have him next year, he will definitely be in the big derbies.”

Fenney and MTM In The Moment (Diarado x Joyblesse Of Ballmore) returned for the handy, navigating tight inside turns while opting to jump all three high options for a score of 89.5 which earned the pair a two-round total of 177.

“Both MTM In The Moment and MTM Grateful are so easy. Macie, our groom, says that they are stall-to-ring horses. No prep is needed, all you have to do is pull them out of their stalls and show up. They don’t look at anything and are both so handy. I think they both have very bright futures ahead of them,” told Fenney.

The $10,000 WEC Ocala 3’ Jr/Am Hunter Derby hosted 25 horse-and-rider combinations, but it was Lilly French that captured the first and second place finish with two consistent scores.

“It all came together today. I rode Citation first and I think it was one of our best rounds. Halfway through the course, I knew that we were in it to win it. His canter was right there, and the jumps were appearing right out of stride,” French expressed. “The pressure was off a bit with Calrissian. He has been going so well, and we just recently had a derby win.”

French returned for the handy first aboard Calrissian. The pair found a first round score of 83 and a handy score of 82 for an overall score of 165.

“I was able to go first on Calrissian and he was perfect. When it came time to show Citation, my trainer told me to take it easy because there was a lot of room between the top. Citation was perfect in the handy. I just focused on staying smooth.”

French and the eight-year-old Warmblood gelding Citation found two consistent scores of 87 for an overall score of 174 for the blue ribbon.

“I am so grateful and thankful that I am able to ride such incredible horses. This is our last week here, so I am overjoyed to end it on such a high note. Now, the horses will get a much-deserved break!”