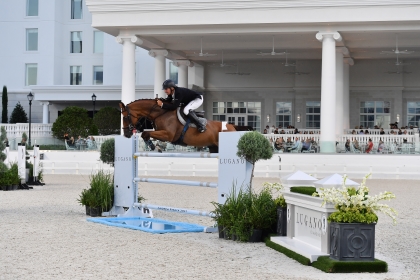 World Equestrian Center – Ocala saw another exhilarating night of equestrian sport on Saturday as 44 horse-and-rider combinations took to the WEC Grand Arena to contest the $75,000 Lugano Diamonds Grand Prix. Tucker Williams designed the technical tracks that featured three double combinations that tested many riders throughout the night. Eight entries achieved a clean first round and only two jumped double clear, but it was Aaron Vale and Don Stewart and Sleepy P Ranch LLC’s Major that took home another grand prix win.

Vale and Major (Carmargue x Pinot) who have now earned seven Grand Prix wins at World Equestrian Center – Ocala, were the fourth pair on course to deliver a clear first round. Vale was happy with how the first course rode, “I rode everything exactly how I wanted to. Everything that I planned and walked happened just how I imagined it.” Vale and Major produced an effortless first round easily jumping each fence to stop the first-round clock at 74.571 seconds.

Vale and Major returned to the jump-off trying to best Jordan Petersen and Diamant’s Legacy’s time. Vale had an idea about how the jump-off would ride, “I walked a possible eight [strides] from one to two but the water was in the way, and everyone was getting ten or eleven strides until Jordan did nine. So, I figured nine was fast enough and in hindsight the eight just wasn’t there.

Vale and Major started the jump-off on a nice gallop doing nine strides from fence one to two. “I rode back to the plank [fence 3] just how I wanted to. Then I was very quick to the vertical [fence 5] after the combination. I ended up doing seven strides in the roll back, but I could see everyone else’s track and I was way inside all of them. I landed on a nice gallop, I thought about waiting but I knew if I waited, I would have just pulled the whole way there, so I just kicked and after a stride or two I knew I was right there.”

Jordan Petersen and Diamant’s Legacy who won Week VI’s $15,000 WEC Ocala Welcome Prix were the only other pair to jump double clear in Saturday night’s $75,000 Lugano Diamonds Grand Prix. Petersen and the 12-year-old Oldenburg stallion were the third pair to deliver a clean first round stopping the clock at 73.991 seconds, well under the time allowed of 78 seconds. The pair returned for the jump-off galloping from fence one to two in nine strides to turn back to the vertical. The pair flew through the double and rolled through the rest of the course leaving all rails up to stop the clock at 36.620 seconds ultimately earning Petersen and Diamant’s Legacy second place.

New Zealand’s Sharn Wordley and his own Gatsby rounded out the top three in Saturday evening’s $75,000 Lugano Diamonds Grand Prix. Wordley earned first place on Gatsby in last week’s grand prix and second place on Casper who received fourth place in tonight’s grand prix. Wordley and Gatsby were the second entry in the class to jump a clean first round stopping the clock at 74.766 seconds. Wordley and the 17-year-old Irish Sport Horse stallion started off the course off strong, rolling from fence one to two to turn back swiftly to fence three. The pair soared through the double combination to unfortunately have the rail down of the tall vertical. Wordley and Gatsby zoomed through the last line stopping the clock at 38.237 seconds with just one fence down, earning the pair third place.

The non-award-winning entry that received the Luck of the Draw $5,000 prize was Tricia O’Connor and KT Adonis.

Lugano Diamonds, Ocala Founding Partner and sponsor of Saturday’s $75,000 Lugano Diamonds Grand Prix, brings some of the rarest and most precious gems to life through exquisite, one-of-a-kind wearable works of art. Lugano Diamonds’ commitment to elegance and their passionate support of the equestrian community is a welcome addition to the facility. To view the collection, including equestrian inspired pieces, please visit their beautiful new salon located in the lobby of the World Equestrian Hotel.