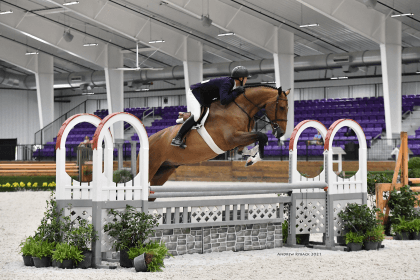 Mitchell of Wellington, Florida, and his own Landmann were on fire today. Mitchell is very proud of the recently imported gelding, “Landmann is an eight-year-old that I imported to be a top equitation horse, but the more that I do the hunters with him, I am starting to think it would be worth putting him in some aluminum shoes and do this full time,” said Mitchell.

Mitchell and the warmblood gelding preformed a foot perfect first round, taking all three high options to earn the highest first round score of 95. “Landmann is super brave and a really good jumper. He is the whole package, and this is only his third time showing in America.”

Mitchell and Landmann returned for their handy round, “I wanted to be as neat as possible, especially after having good rides in the first round.” The pair flowed flawlessly through the handy course, easily soaring over each fence while jumping all three high options to earn a handy score of 91.5 for a two-round total of 186.5 for the win.

Second place honors was also captured by Mitchell and Float On Equestrian LLC’s Casting Call who has had great success in the class, “Casting Call has done great here. The first week I was here he was second then he won it the second week, and then he was second again today.”

Mitchell and the seven-year-old Westphalian gelding delivered a lovely first round, earning the classes second highest score of 93. Mitchell and Casting Call returned for the handy round producing another gorgeous course that looked effortless, jumping all three high options for a score of 92 for a two-round total of 185.

Nineteen entries gathered to the CaptiveOne Advisors Indoor Arena early this morning to compete for the top prize in the $10,000 WEC Ocala 3’ Hunter Derby but it was Megan Young and Lee D. Cesery’s Comanche that brought home the blue ribbon.

Young and the 13-year-old warmblood gelding performed a effortless first round taking all three high options to collect a score of 89. Young has been riding Camanche for many years, “We have had him since he was about six-years-old. I competed him in the pre-greens and now he’s been to derby finals. He knows his job well and is a very handy horse.”

Young and Camanche came back for the handy course, taking each tidy inside turn, “My plan was to be nice to one, slip and slide to two, then I counted eleven to the oxer so I could get inside to the double. I needed a bit of pace in the double so I wouldn’t cut down on the back rail, but I rolled back to the trot fence where I needed to relax then I got to breathe to the last two.” The pair finished the handy course jumping all three high options to receive a handy score of 91.5 for a two-round total of 180.5.

Douglas and MTM Farm’s MTM Incanto (Cornet Obolensky x Zaza Di Villagana) jumped an impeccable first round taking all three high options to earn a high score of 88. Douglas and the six-year-old warmblood gelding returned for the handy, flowing through the course finding perfect distances to receive a score of 86.5 for an overall score of 174.5.

Megan Young took home another third place aboard Lee D. Cesery’s Luminous. Young and the 10-year-old Westphalian gelding delivered two beautiful rounds, earning a first round score of 83 and a handy score of 91 for a two-round total of 174 to round out the top three.