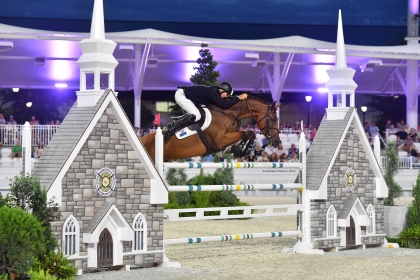 Thirty-four combinations from ten different nations elected to contest Tucker Williams’ first round track and an even ten representing four flags managed to find the key to a clear first round to qualify for the jump-off.

Vale (USA) managed to snag two of the ten spots in the jump-off aboard Prescott and Gray’s Inn. Vale found his first clear round aboard Prescott in the initial phase in 79.424 seconds, just within the time allowed of 81 seconds.

When it came time to return to the jump-off, Vale wasn’t quite sure if he could beat the pathfinder, Santiago Lambre’s quick short course time. “I watched Santiago’s round on the screen in the schooling arena. I really thought that he had won the class already. There weren’t any other strides to leave out and he found ever single fence going forward. Even though I thought he might have it, I am never one to let that stop me from trying.”

Vale used the turns and the 10-year-old Holsteiner gelding’s handiness to his advantage, “When I went in, I could see the tracks behind fence two to the live pool. I knew I could go inside those tracks, and I ended up catching the liverpool going forward. I got seven, seven and seven like Santiago, but I was faster back to the Lugano fence. It was just fast enough.”

Lambre (BRA) and Cetano Van Aspergem Z are coming off their win from Thursday’s $30,000 C. Jarvis Insurance Welcome Prix. Tonight, the pair were the first down the ramp and the first clear. Lambre and the 13-year-old Zangersheide gelding flew through the course in 33.136 seconds to ultimately earn second place.

Vale returned back to the WEC Grand Arena aboard Thinkslikeahorse’s eight-year-old Czech Warmblood gelding Gray’s Inn (Cannavaro x Jena). Vale knew he couldn’t catch his own time or Santiago’s but he wanted to steal third, “This is my wife’s horse, so I don’t ride him very often. I have shown him in three grands prix; one here during the winter circuit, a small one in Wellington and now this one. I was pretty impressed with him. He felt much more confident in the jump-off than he did in the first round, so I was able to open him up.”

Vale and Gray’s Inn soared through the finish in 34.799 seconds to slot into third place. “I am unsure if my wife is going to let me borrow him again because I have borrowed her horses in the past and she didn’t get them back,” laughed Vale.

An additional $5,000 was awarded to the fastest four-faulter of the $100,000 Coors Light National Grand Prix. Second place finisher, Santiago Lambre and his own Comtess 202 snagged the award with an incredibly fast time of 73.801 with one rail down.