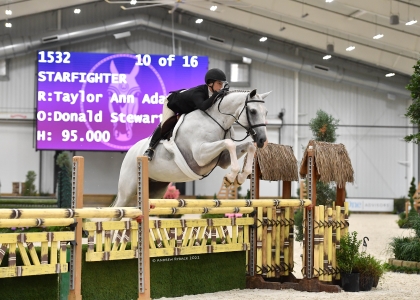 Adams and the 10-year-old Hanoverian gelding created a flawless first round, jumping each fence in perfect form to earn a score of 91 from the judges.

Starfighter is a new mount for Adams, “Don Stewart and Stefano Baruzzo loaned him to me about two months ago. I called Donald asking if he had anything that I could show in the big derbies and he brought up Starfighter. Stefano was showing him in the 1.40m Jumpers, but thought he would excel as a big derby horse, so I have had the privilege of showing him.”

Adams and Starfighter were the second-to-last pair to return for the handy, “I wanted to be smooth. I knew my first-round score was good enough, so I didn’t want to do anything too risky. Stefano told me to just stay focused, which simply means don’t change anything.”

The pair produced a gorgeous round to secure a score of 93 for a two-round total of 184 for the win.

When it came to return for the handy, Douglas had a different idea for the approach to fence one, “Many riders started going right to right, but I figured with a left approach, he would jump and land left, making the inside turn much smoother,” said Douglas. “I had a few points to make up, so I opted to take a few tidy inside turns that would show him off. I know the horse so well at this point, I know what track would suit him the best.”

Douglas and the 13-year-old Holsteiner gelding yielded an exceptional handy round to earn the class’s highest score of 90 for an overall score of 178 for the victory.

“This is his one job during the week. He rolls up, does the derby, hops back on the trailer and gets turned back out within the hour. He deserves nothing less,” laughed Douglas.

Thirty-four competitive contestants tried their hand at Pat Muskus’s flowing track, but it was Mary Beth McGee and C-Star that impressed the judges to take home the victory in the $10,000 WEC Ocala 3’ Jr/Am Hunter Derby.

McGee and the 13-year-old Hanoverian gelding created a smooth first round, jumping all three high options to earn a score of 79.

“I started leasing C-Star this year. He is brave and very straight forward. He has a big beautiful jump for a big beautiful guy. He is 17.3hh, but he is still able to do all the twists and turns in the handy. I am pretty new to the derbies, but he makes them so much fun.”

McGee and the scopey C-Star returned for the handy, “I made a few little mistakes in the first round, so Mark Jungherr said I had nothing to lose. I did every single inside turn that the course offered. C-Star is so brave and dead honest, as soon as I point him at a fence, he is going to go no matter what.”

The duo floated through the handy taking each inside turn while jumping the high options to capture a score of 88 for an overall score of 167 for the blue ribbon.