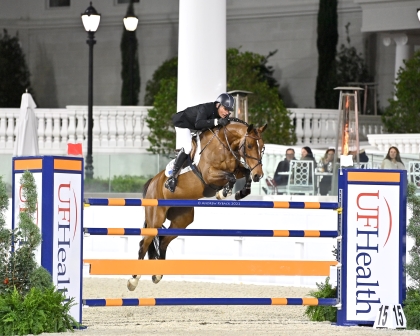 Vale and the nine-year-old Dutch Warmblood mare entered the class toward the middle of the order, producing a smooth first round in 77.793 seconds.

I Adermie R 4 is a fairly new mount for Vale, “I started showing her sometime in September. We showed here at WEC in December where we did 1.30m, 1.35m and a 1.40m. She has been moving up quite nicely. She’s won a few grands prix at HITS, including three FEI 2* competitions. She just jumped her first night class here a few weeks ago and had just one down. She’s been amazing,” said Vale.

Vale and I Adermie R 4 were sixth pair to return for the jump-off, “I started on a fast gallop to the first fence. I did one stride more than the other riders from one to two, but I was way inside everyone else’s track to the next vertical. My boot actually hit the standard, that’s how tight of an angle I was on. Then I was super quick to the oxer and the jump across the middle of the ring. After the double combination, I was just able to fly to the last one without hitting the brakes.”

Vale and I Adermie R 4 flew through the timers to stop the jump-off clock at 38.655 seconds.

Richard Spooner (USA) and Show Jumping Syndications International’s Chatinus (Chacco-Blue x Argentina) slotted into second place in the $75,000 UF Health Grand Prix. Spooner and the 15-year-old Hanoverian delivered a seamless first round in 81.309 seconds, just within the time allowed of 82 seconds. Spooner and Chatinus were the second pair to try their hand at the short course, going clear in 39.624 seconds.

Third place honors went to Will Simpson (USA) and Coxe Horses LLC’s Whoop De Doo  (Mr. Whoopy x Double Trouble X). Simpson and the careful 11-year-old Warmblood mare were the first pair to produce a clean first round in 78.988 seconds. The pair returned for the jump-off, soaring through the entirety of the course in 40.318 seconds, to ultimately round out the top three.

An additional $5,000 was awarded to the fastest four-faulter of the $75,000 UF Health Grand Prix. Brazil’s Santiago Lambre and Dingeman received the award with an incredibly fast time of 77.498 seconds with one down.

Lincoln Russell and Limoncello SCF received the $5,000 ‘Luck of the Draw’ award.