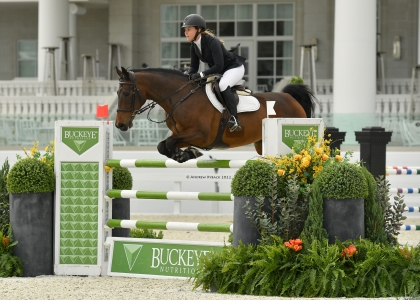 Sadler (USA) and the 14-year-old Brandenburg gelding produced an efficient first round with a tidy jumping effort that stopped the clock at 69.040 seconds.

Many other competitors fell victim to the tight time allowed, but Sadler wasn’t too worried, “The time allowed was perfect for us. Cezarro is a smaller guy, he thrives off momentum. The faster I go, the better he jumps. I don’t ever have to worry about the time allowed with him, because he’s efficient across the ground and over the jumps,” Sadler remarked.

Sadler and Cezarro advanced straight the to jump-off, “Dorrie [Douglas] went down the first line in five strides. I gave it a go, but chickened out last second and got the six,” laughed Sadler. “It ended up working out, because I was able to land and turn very quickly. He’s amazing at slicing verticals on a gallop, so that was right up our alley. Then we were super quick from the skinny back to the oxer.”

Salder and Cezarro flew through the finish stopping the clocks at 30.455 seconds.

Just behind the winning pair was Camille Maddrix (USA) and Caroline Michele Dugas’s Skyfall (Vigaro x Twi Light). Maddrix and the 13-year-old Dutch Warmblood gelding entered the class toward the end of the order, delivering a smooth first round in 68.730 seconds. The pair went right to the jump-off soaring through the course in 30.566 seconds to slot into second place.

Dorothy Douglas (USA) and MTM Farm’s Faerdel (First Edition x Farina) were one of the first few entries to try their hand at Cabral’s fast track. Douglas and the 12-year-old Oldenburg gelding yielded a smooth first round in 72.051 seconds. The pair advanced to the jump-off, leaving out a stride from one to two to fly through the rest of the course stopping the clock at 31.049 seconds, that ultimately earned the pair third place.

Derek Petersen (USA) and Zechariah 3:9 have had quite the success during the 2022 Winter Spectacular Show Series earning numerous top finishes including winning the 1.40m Jumper Classic just last week.

Petersen and Zechariah 3:9 continued their successful streak on Friday, producing a fast and smooth first round in 67.810 seconds.

Petersen and the eight-year-old Dutch Warmblood gelding advanced to the jump-off flying through the course not pumping the brakes once to stop the clock at 35.885 seconds.

Tom Foley (IRL) and his own Independence LCH (Caretino Gold x Caransa LCH) rounded out the top three with a first round time of 71.908 seconds and a quick jump-off time of 38.522 seconds.