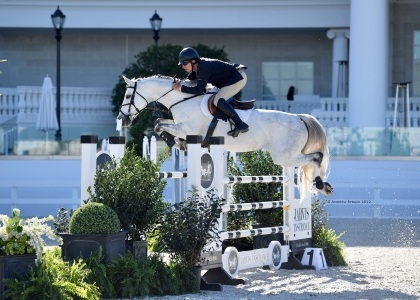 Vale (USA) and the 11-year-old Selle Francais mare were the ninth pair down the ramp into the WEC Grand Arena delivering a seamless first round in 73.094 seconds.

Vale spoke about today’s class, “The course was a bit tricky with the sun going down and the jumps set pretty big. Boreale De Talma has had some really nice rounds lately and we have been trying to find a class we could win and it happened to be this one,” said Vale.

Vale and the scopey Boreale De Talma advanced straight to the jump-off, starting on a strong gallop to the C. Jarvis Insurance oxer, to soar to the line. The pair quickly turned back to the double combination to dash through the rest of the course, stopping the clock at 29.795 seconds, a time that no other competitor could best.

Vale was the winner of last week’s $75,000 UF Health Grand Prix aboard his other mount, I Adermie R 4. Vale recently earned an invitation to the World Cup Finals aboard Thinks Like A Horse’s Elusive, “I have never been to the World Cup, so I am very excited to go. I am not sure if I have a World Cup Finals horse, but we are going to go take on the David and Goliath scenario and see if we can hang in there.”

Santiago Lambre (BRA) and his own Dingeman  (Nintender x Jolanels)secured the second place finish in today’s $20,000 C. Jarvis Insurance Welcome Prix. Lambre and the 14-year-old KWPN gelding delivered a smooth first round in 72.395 seconds. The pair went straight to the jump-off flying through the course, not touching a single rail in 30.360 seconds, to ultimately earn third place.

Kelley Robinson (CAN) and her own Blue’s Yer Daddy  (Mr Blue x Esprit De Lys) captured third place honors in today’s class, navigating an effortless first round in 73.857 seconds, just within the time allowed of 75 seconds. Robinson and the 15-year-old Belgian Warmblood gelding jumped-off immediately, galloping through the course while taking tidy turns to stop the timers at 31.385 seconds.