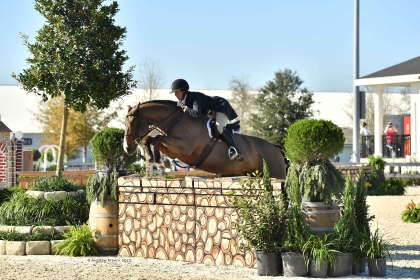 Steege and the 10-year-old Belgian Warmblood gelding have enjoyed success at World Equestrian Center – Ocala, earning numerous top finishes during last year’s Winter Spectacular Show Series. Steege was very proud of Lafitte De Muze today, “We are coming off quite a long break. Lafitte hasn’t shown since Capital Challenge in October. It felt great to know that he just walked out there today after a three-month hiatus from horse showing and went as well as he did.”

Steege and the stylish Lafitte De Muze delivered a foot-perfect first round, taking all three high options with ease turning in the class’s highest first round score of 96.

Steege enjoyed the options that the handy offered, “The handy was great. It really had an abundance of options, which was very fun. Currently, I am really trying to practice riding with a bit more pace and to be as handy as I can while incorporating every high option. There was one place in the handy where I changed my plan; I was planning on going around the oxer after the church bell vertical to get to the next oxer, but then I saw Tracy [Fenney] and a few others go inside the oxer to catch the next fence on a nice slice. I did that which wasn’t easy, but it came up beautifully. Then I was able to easily wrap around to the high option vertical and stay inside the decorations to slice the last fence.”

Steege and the fan favorite Lafitte De Muze returned and laid down a near-flawless handy round, taking every inside turn, while jumping all three high options to earn an outstanding score of 99, and an overall total of 195.

Steege is so proud to pilot Lafitte De Muze and believes he is truly one of a kind. “Lafitte is the best. He is so humble and loves everyone. Lafitte’s owner Cheryl Olsten wrote a children’s book about him called Big Wishes for Little Feat. We all adore him, and he becomes a favorite to everyone that meets him. He was also the first equine ambassador of Equus Foundation, where all of his winnings go to charities that are in need. He is just a one-of-a-kind horse,” smiled Steege.

Tracy Fenney took home second and third place honors during this afternoon’s $20,000 WEC Ocala 3’6”-3’9” Hunter Derby. Fenney’s second place mount, MTM Plus One (Captain Jack x Cantonia) captured the class’s second highest first round score of 89. Fenney and the nine-year-old Westphalian gelding came back for the handy, taking every inside turn available while jumping all three high options to earn a very high handy score of 95, for a two-round total of 184.

Fenney and her third place mount, MTM Raisin (Uriko x Adria) produced a beautiful first round while jumping to the top of the standards to receive a first round score of 85.75. Fenney and the adorable seven-year-old Holsteiner gelding resumed for the handy, jumping each fence in perfect form while completing all three high options to earn a score of 89, and an overall score of 174.75.

The Irish is a new mount for Maddrix, “Irish came to us about a month ago. He is owned by Heather Larson and he’s going to be for her daughter eventually, but he just came to us for a bit of training. He’s going to be great for her once she’s ready. We did the first years this week, which is a huge step up for him. He ended up champion.”

Maddrix and the eight-year-old Trakehner gelding floated into the ring, navigating a lovely first round, taking all three high options to earn a score of 87. “He jumped great the first round. The course was nice and flowing. It’s hard to make a really nice derby course in a regular hunter ring, but the course designer today was great. I loved the wall jumps and the hay bale combination,” shared Maddrix.

Maddrix made a last second decision when he returned for the handy with The Irish, “I had a few points to make up. There was an option in the handy that no one else had done yet, which was to take the sharp turn to the diagonal hay bale fence. I was thinking that I had to do something to beat Dorrie [Douglas]. We were all talking about it in the schooling arena. I wasn’t going to do it but then I jumped the trot fence, and it was right there off my eye, so I gave it a go and Irish was perfect. He is as handy as can be.”

Maddrix and The Irish produced a foot-by-foot perfect handy round easily completing the difficult turn to the hay bale fence to earn the class’s highest handy score of 93, for a two-round total of 180 for the win.

Second place finishers, Dorothy Douglas and Abigail Davenport’s MTM Exceptional (Casall Ask x Rheinsberg) were just behind the winning pair. Douglas and the 13-year-old Holsteiner gelding have had quite the success at World Equestrian Center – Ocala earning multiple top three finishes during the 2021 Summer Series. The pair returned to Hunter 1 to continue their success. Douglas and MTM Exceptional generated a beautiful first round, not touching a single rail to earn the judge’s highest first round score of 91. Douglas and MTM Exceptional were the last pair to return for the handy, producing the same difficult inside turn that Maddrix and The Irish completed, to earn a handy score of 86, for a two round total of 177.

Carly Campbell-Cooper and Ashlynn Crowley’s Cabat rounded out the top three in today’s $15,000 WEC Ocala 3’ Open Hunter Derby. Cooper and Cabat performed a smooth first round, while jumping all three high options to earn a first-round score of 88. The stunning pair resumed for the handy, delivering a beautiful track, taking all three high options with ease to secure a score of 87 for an overall score of 175.

Nineteen gorgeous entries contested the winding track in this afternoon’s $15,000 WEC Ocala 3’ Jr/Am Hunter Derby, but it was Camryn Halley and her own Now and Zen (Cabalito x Special Consideration) that earned the top spot.

Halley and the seven-year-old gorgeous dapple gray gelding navigated a smooth first round jumping all three high options with ease to earn a first-round score of 84. Halley was very happy with Now and Zen, “Now and Zen is still pretty new to me. We got him in the beginning of the summer. He is such a good boy and really wants to win. I’ve had so much fun showing him.”

Halley had a plan for the handy, “I wanted to be as slick as possible for the handy. I wanted to get my canter as early as possible so I could get a nice distance to the first oxer so it could set me up for the trot jump. I think the first three jumps were the trickiest and then after that I found that the rest flowed seamlessly. I really liked the hay bale option fence, I personally ride better off of a short turn so that came up super nicely for me. He was fantastic overall and I am so proud of him,” expressed Halley.

Halley and Now and Zen performed a beautiful handy round, taking each inside turn with ease while walking down the lines to receive the class’s highest handy score of 87 for an overall score of 166.

Second place was earned by Addison McQuaker of Schomberg, Ontario and her own Golden Ticket (Stakkato Gold x Cindy Crawford). McQuaker and the seven-year-old Oldenburg gelding produced a beautiful first round, jumping all three high options to earn the class’s second highest score of 87. The pair returned for the handy, rolling around the turns while jumping all three high options to secure of score of 79 for a two-round total of 166.

Nicole Lyvere and her own Vaillero (Vaillant x Highlight Z) rounded out the top three in today’s $15,000 WEC Ocala 3’ Jr/Am Hunter Derby. Lyvere and the 14-year-old Zangersheide gelding had a lovely first round, jumping all three high options in perfect form to secure a score of 83. The pair returned for the handy delivering a smooth round while completing two high options for a score of 80, to earn a total of 163, for third.

The ‘Style of Riding Award’ Returns

Before the start of the handy round in the $15,000 WEC Ocala 3’ Open Derby, the prestigious Style of Riding Award was presented to Hillary Johnson for her classic style and her sportsmanship. The Style of Riding Award is generously presented by Bill Rube to be awarded to the rider who best displays the American Style of riding in the ring and sportsmanship outside of the competition arena. The recipient serves as a role model for preserving the integrity and tradition of equestrian sport. “This award is very special to me because the recipient of this award pays it forward both in and out of the show ring,” says Rube. Johnson received an elegant duffel bag and wore a white rose corsage on her lapel throughout the handy round to signify her achievement.