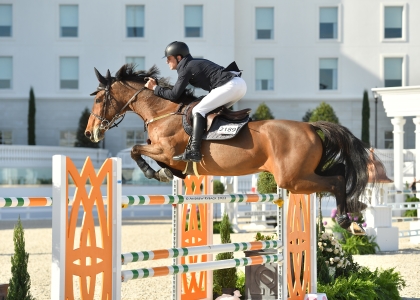 OCALA, Fla. – The first week of the highly anticipated 2022 Winter Spectacular Show Series is officially underway. Feature class action for the series began today with 29 competitive entries vying for the win over a technical track built by Bobby Murphy of Lexington, KY. The $20,000 C. Jarvis Insurance Welcome Prix track showcased an intricate jump design with challenging turns and bending lines. Eleven entries achieved a clean first round with five jumping double clear, but it was the first on course, Santiago Lambre and his own The Diamant Rose Z (Toulon x Diamant Z) that delivered the winning round.

Lambre and the 11-year-old Zangersheide mare were the first horse-and-rider combination down the ramp into the WEC Grand Arena. Lambre and The Diamant Rose Z established a rhythm after the buzzard rang, delivering a fast and clean first round stopping the clock at 80.947 seconds, well under the time allowed of 85 seconds.

Lambre wanted to be competitive in today’s $20,000 C. Jarvis Insurance Welcome Prix, “It’s tricky when you are the first person on course and first in the jump-off. I really just tried to go as fast as I could. The courses today were pretty difficult, a lot of big square oxers, but [The Diamant Rose Z] was quick off the ground,” expressed Lambre.

Lambre and the scopey mare advanced straight to the jump-off, galloping from fence one to roll to fence two on a smooth bend. The pair landed right and sliced the orange oxer. Lambre and the fiery mare then dashed through the remainder of the course, leaving all rails up to stop the jump-off clock at 41.722 seconds, a time that no other entry could catch.

“I am still getting to know The Diamant Rose Z. She has a lot of blood and always tries her hardest. She has improved so much, and I think this year is going to be her most competitive year yet,” said Lambre.

Australia’s Rowan Willis and his own Billy Guilder (Billy Congo x Cavalier) captured the second fastest time during today’s $20,000 C. Jarvis Insurance Welcome Prix. Willis is a familiar name at World Equestrian Center – Ocala taking home many top three placings during the inaugural 2021 Summer Series. Willis and Bill Guilder took to the WEC Grand Arena toward the end of the order, delivering a foot-by-foot perfect first round stopping the timers at 81.318 seconds. Willis and the 13-year-old Anglo-European Sport Horse gelding jumped-off immediately generating tidy inside turns while easily leaving out strides to stop the clock at 43.196 seconds to secure second place.

Rounding out the top three was Colleen Acosta and her own Lancome (Eldorado Van De Zeshoek x Havanna Van De Doornhaag). Acosta and the 11-year-old Belgian Warmblood mare navigated a smooth first round, jumping each fence with ease to stop the first-round clock at 83.604 seconds. The pair advanced to the jump-off jumping fence one on a nice angle to streamline to fence two. Acosta and Lancome soared through the rest of the course, not touching a single rail to stop the clock at 44.324 seconds.