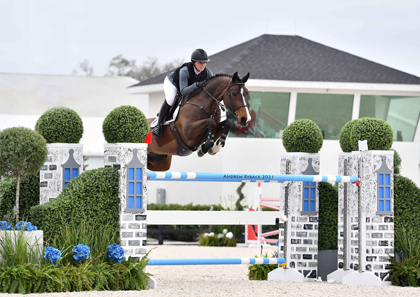 Courses for today’s classes were designed by Peter Grant, an internationally recognized FEI Level 3 course designer. Grant is best known for being a part of the build team at Spruce Meadows in Calgary, Canada, since 2004, where he has designed at four CSI5* tournaments. He has assisted at such championships as the 2007 and 2017 FEI Jumping World Cup™ Finals and the 2010 and 2018 FEI World Equestrian Games. This summer, Grant will assist in his first Olympic Games in Tokyo, Japan.

This afternoon’s $75,000 WEC Grand Prix 1.50m saw a hyper-competitive international field of 33 entries with nine countries represented. The track for the class featured 16 jumping efforts including a triple combination, a double combination, multiple liverpool fences and a triple bar. Just four entries advanced to the jump-off, but it was amateur Kady Abrahamson and Abrahamson Equestrian’s Any (Aljano x Nina XI) that nabbed the win, besting Olympians Sharn Wordley and Scott Keach.

New Zealand’s Sharn Wordley was one of the first entries to contest the course aboard his own Esmee (Berlin x Voltaire). Wordley and the 11-year-old Warmblood mare have an impressive resume that includes top placings in several grand prix classes. This afternoon, Wordley and the scopey gray mare easily found a clear first round in 77.307 seconds, well within the time allowed of 79 seconds, securing a spot in the jump-off. Sharn Wordley also rode his own Gatsby (Simba x Daisy Cruise) in the $75,000 WEC Grand Prix 1.50m. The pair had one unlucky rail, but was one of the fastest four-faulters, keeping them in the ribbons.

Next to earn a chance at the short course were Kady Abrahamson and Abrahamson Equestrian’s Any (Aljano x Nina XI). The 12-year-old Holsteiner mare is a newer ride for Abrahamson, but the pair has started strong, taking the Champion title in the 1.40m jumpers during Week 1 of the World Equestrian Center — Ocala Winter Spectacular. Abrahamson and the fiery bay mare stepped up to the technical 1.50m track this afternoon, nailing a clear first round in 77.205 seconds.

Austrailian Scott Keach and Five Henry Stables’ Falcon De Hus Z (Florian De La Vie x Alidiva) also ensured a return in the jump-off. Keach and the 11-year-old Zangersheide gelding earned a 7th place finish in last week’s $75,000 WEC Grand Prix 1.50m and were on form again this afternoon as he piloted the powerful gelding to a clear first round in 77.957 seconds. Keach also laid down a stellar round aboard his own Wild Thing (Caracas x Wild Oats), but they incurred two unfortunate time faults. However, with just four clear in the first round, the pair earned a respectable 5th place finish.

First to return for the jump-off were Wordley and Esmee. The pair held nothing back, galloping to each fence and stopping the clock at 41.837 seconds, setting a tough time to catch. Next in the ring were Abrahamson and Any. Though the pair have limited experience together, they were completely in tune and both dead-set on a fast, clear round. Abrahamson and Any flew through the course, crossing the timers with all rails up at 40.274 seconds and moving into 1st place. Keach and Falcon De Hus Z were next to contest the short course. The pair was quick across the ground and clear around the course in 43.526 seconds, settling comfortably into 3rd place and leaving Abrahamson in 1st and Wordley in 2nd.

Abrahamson joined us after the class to chat with us about her win, “Any is a newer horse for me. Sharn Wordley actually used to ride her for her previous owner, Arnoud Dobber. I got the ride on her in December and we showed in the highs twice. I did my first grand prix with here two weeks ago with one down. After that, I told my parents that we should really try to buy her and last week we ended up getting her, which turned out to be the perfect decision. It’s funny because she really reminds me of my other mare, Charline 28, who won a bunch. It’s crazy how similar they are, I feel right at home on her.”

When asked about her ride today, Abrahamson laughed, “When I walked the course I was actually scared that it was a bit big for a horse that I don’t know too well. I train with Sharn Wordley and used to train with Scott Keach, and they both mentors, so I talked with them and they urged me to do the class. She ended up jumping incredibly well and even crossed her legs over the last oxer because she was trying so hard.”

She also commented on her plan in the jump-off, “In the jump-off, I thought that I would see what Sharn did, then do the same. I knew everyone in the jump-off was going to be quick, so I figured that I could end up 4th and still get a good check. The win was really a surprise. Everything on course just came up right out of stride and she is just such a fast horse.”

Abrahamson shared that today’s win was exceptionally special, “It’s funny that Sharn, Scott and I ended up being top three because we are ‘Team European Select Auction. There were actually five of us in the top 10 that are part of that team. It’s a new auction coming up that we are all involved in and it will take place the first or second week of March. The first set of horses arrive Tuesday.”

She also noted, “I would like to thank everyone who helped make this happen today: Sharn Wordley, Scott Keach, Afton Chmela who works for us, Evita Hermans who works for us and Matt Wildunge who is my barn manager. She is not an easy horse, so everyone puts in a lot of effort.”

The course for this morning’s $7,500 Futures Prix 1.40m featured 15 jumping efforts including a double combination, a triple combination and a liverpool. With just one available inside turn and plenty of space between the fences in the jump-off, speed was the determining factor of the class. Thirty-one entries contested the track and seven managed to jump double clear, but it was Christina Kelly and her own Kingdom (Lux Z) that notched their second Futures Prix win of the season, beating second place by nearly two seconds.

Elizabeth Yeager and her own Justin set a quick pace in the class early in the order. Yeager and the 12-year-old Belgian Warmblood gelding have earned ribbons in the 1.40m jumpers at World Equestrian Center — Ocala over the past two weeks and stepped up to the 1.40m today. The pair was quick and clear in the first round in 81.129 seconds, well within the time allowed of 89 seconds. They continued straight to the jump-off, taking the inside turn option to the combination, shaving valuable seconds off of their time. Yeager and Justin stopped the clock at 43.088 seconds, setting a tough time to beat.

Yeager and Justin held the lead in the class until Ireland’s Christina Kelly and her own Kingdom (Lux Z) took to the course. Kelly and the 13-year-old Irish Sport Horse gelding nabbed the blue ribbon in the $7,500 Futures Prix 1.40m during Week 1 of the World Equestrian Center — Ocala Winter Spectacular and returned this morning in search of another victory. The duo navigated a clear first round in 84.082 seconds, then advanced straight to the jump-off. Rather than taking the inside turn to the combination, Kelly opted to stay out, but gallop down the first and last line, leaving a stride out in each to make up time. Their efforts paid off as Kelly and Kingdom stopped the clock with a second clear round in 41.361 seconds to ultimately win the class.

Tommy John Russell and Vick Russell’s Shining De Reve (Zandor Z x Akinella) also had a stellar ride in the $7,500 Futures Prix 1.40m. The 14-year-old Selle Francais gelding earned a 12th place finish out of 65 entries this week in the 1.20m jumpers with owner Vick Russell, preparing him well for this morning’s class. Tommy John Russell and Shining De Reve found a clear first round in 85.546 seconds, conserving plenty of energy for the short course. The pair advanced straight to the jump-off, staying out to the combination but surging forward between fences. They crossed the timers with all rails up at 43.432 seconds, sliding into 3rd place just behind Yeager and Justin, leaving Kelly and Kingdom in the top spot.

Kelly of Double C Ranch in Ocala, Florida took a moment to chat with us ringside about her win, “He’s been jumping great all week. We’ve given him a couple of weeks off to let him have a break after he started back in the 1.40m. We did the 1.30m earlier this week and he was great. It was fun to have a nice double clear class. I tend to get a little competitive and go faster than I expect. He was great, he just keeps coming out and doing his job.”

When asked about her plan in the jump-off, Kelly replied, “He is really good at covering ground, he’s got a huge stride. He’s an easy one to leave a stride out on, so my plan was to leave out down the first and last lines instead of having to go inside to the double, because it was quite tight. He’s got that big step, so I knew that he had that in him. I got a good few shots at the single jumps, too, so the plan worked out well. It was a good time.”

Kelly and Kingdom competed in the grand prix ring together years ago before the handsome gelding was sold. He has now found his way back to Kelly and she looks forward to their future together, “I’m so happy that I’ve got him back. Hopefully we can keep him this time and get him back up to the grand prix again. He’s been going really well!”