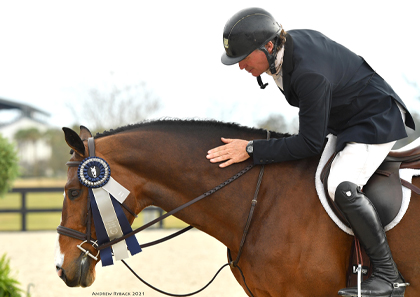 The $20,000 WEC Hunter Derby 3’6″-3’9″ took over the ring this afternoon as 20 entries tried their hand at the inviting derby course. Several entries scored into the high 80s, but just one managed a score in the 90s: David Jennings and Allison Ventura’s Jordantinus (Air Jordan x O.B.O.S. Flower). The duo earned their victory today by delivering two stunning rounds.

David Jennings and Allison Ventura’s Jordantinus (Air Jordan x O.B.O.S. Flower) laid down two beautiful rounds in this afternoon’s derby. Jennings and the 14-year-old Irish Sport Horse stallion took 1st place in the $10,000 USHJA International Hunter Derby at the Florida Horse Park in early January and were searching for another victory today. The elegant pair laid down a stunning first round, taking all four high options for a score of 86. Jennings and the handsome bay gelding upped the ante in the handy round, effortlessly taking inside turns that no other entries attempted. Their efforts paid off as they were rewarded with a score of 93, totaling 179 for the win.

Jeffrey Ayers and his own Cartel took to the course early in the order. Ayers and the 10-year-old Warmblood gelding have consistently taken Champion titles in the Green 3’9″/High Performance Hunters during the World Equestrian Center — Ocala Winter Spectacular 2021, preparing them well for this afternoon’s class. The pair set the standard right off the bat with a score of 89. They returned last in the order for the handy round, taking handy inside turns to fences 7 and 8, as well as all four high options. The duo earned a score of 88, bringing their overall score to 177 for second place.

Melissa Donnelly and Elizabeth Becker’s Corlando 49 (Cartani x Olanda I) also found success in this afternoon’s derby. Donnelly and the 15-year-old Holsteiner gelding earned 2nd place in the $20,000 WEC Hunter Derby 3’6″-3’9″ during Week 1 and returned for another attempt at the win. The pair found each distance easily in the first round, taking all four high options for a score of 85. They opted for the inside track to fences 7 and 8 in the handy round, earning a score of 89 for an overall total of 174, landing them in 3rd place.

Jennings stuck around after the class to chat with us about his win aboard Jordantinus, “He is a stallion who used to do some grand prix with his prior rider. He’s a bit of a veteran when it comes to making nice turns and keeping a big stride. In the first round, he was a little on the fresh side because of the rain, but we got him a little quieter in between rounds and he came back in the handy round perfectly. We were the only entry to do a couple of the inside turns, so I think that helped us quite a bit.”

Jennings added, “Full Circle Farm was based out of Wellington, Florida, for a long time, but I’ve been in Ocala for the past nine years. We just bought a piece of property and are building a farm here in Ocala, so I’m here for the winter and on the road for the summer.”

The $15,000 WEC Derby 3′ Open welcomed 28 entries as they vied for the win in Hunter 1 this morning. Competition was tough with scores ranging into the low 90s, but it was Dorrie Douglas and MTM Farm’s MTM Dashing (Cascadello II x Jubilate) that nabbed the win.

Dorrie Douglas and MTM Farm’s MTM Dashing (Cascadello II x Jubilate) contested the course early in the order. Douglas and the 7-year-old Holsteiner gelding earned 3rd place in Week 3’s $15,000 WEC Derby 3′ Open and returned this morning on the hunt for blue. The duo flowed effortlessly through the first round, choosing to take 3 high options and earning a score of 83. Douglas and the stylish gelding returned for the handy round, navigating a second impressive round, taking 3 high options and opting for a tidy inside turn to fence 7. They were rewarded for their efforts with a score of 91, bringing their total score to 174 to ultimately win the class.

David Jennings and Libby Hott’s Due North (Diacontinus x Picard) were hot on Douglas and MTM Dashing’s trail. Jennings and the 6-year-old Hanoverian gelding took top placings in the USHJA Hunter 3′ at the Florida Horse Park in early January, preparing them well for this morning’s class. The pair were rhythmic in the first round, taking four high options and finding each fence in stride for a score of 84. They returned late in the order in the handy round, again choosing all four high options and taking a handy inside turn to fence 8 for a score of 89, totaling 173 for second place.

Belynda Bond and Gesture, LLC’s Norderney were just behind Jennings and Due North. Bond and the 16-year-old Hanoverian mare have earned several ribbons in hunter derbies at World Equestrian Center in Wilmington, Ohio, and are no strangers to the winner’s circle. The pair were consistent in the first round, taking two high options and earning a score of 88. They returned last in the handy round, taking the inside track to fence 8 along with one high option for a score of 84, bringing their overall score to 172 for 3rd place.

Douglas took a moment to chat with us after the class about her ride aboard MTM Dashing, “He’s a coming 7-year-old, now. The goal was to be smooth and do all of the right numbers. In the handy I watched Tracy go and she did the inside turn to the second to last fence, so I knew that I could do that. I was just hoping to give him some good miles.”

When asked about MTM Dashing, Douglas replied, “We bought him as a 4-year-old and I did him in the Pre Greens last year. With all of the nice classes offered at WEC, I’ve been gearing him toward doing the 3′ derbies. It seems to be working out!”

Douglas also added, “I think it’s pretty cool that WEC switched up the rings this week. From a standpoint of bringing young horses along, it’s cool that we get to jump such nice jumps in different rings and give the horses good experience.”

Coberley and Havens Schatt’s Actender PS (Action Breaker x Conpila) earned 2nd place in the $15,000 WEC Derby 3′ Non Pro during Week 3 and returned today with the same polished look to their ride. The duo wowed the judges in the first round, taking all four high options and earning a score of 92. Coberley and the 8-year-old Oldenburg gelding returned last in the handy round with the highest score of the first round. They flowed easily through the course, taking inside turns where available. Coberley and Actender PS earned a score of 93 for their efforts, bringing their overall score to 185 for the win.

Coberley also had a stellar ride aboard David Glefke’s Undercover (Untouched x Tosca). He and the 8-year-old Westphalian gelding took 3rd place in last week’s $15,000 WEC Derby 3′ Non Pro and had an identical performance this afternoon. The pair was consistent and chose all four high options in both round, earning a pair of 86 scores for a total of 172 and 3rd place.

Addison Reed and Bridget Phillips’ Dreamland (Landlord x Pamela) also impressed the judges in the non pro derby. The 12-year-old Dutch Warmblood gelding regularly shows in the jumping ring with Phillips, but Reed had the ride today in the hunter ring. Reed and Dreamland nailed the first round, taking all four high options for a score of 88. The duo returned with a foot-perfect handy round, earning a score of 90 for a total of 178, sliding into 2nd place.

We caught up with Coberley after the class to chat about his rides, “I thought my horses listened and went really well. They proved themselves today. I did all of the turns that I planned in the handy and the horses went through those turns very well.”

Before the start of the handy round in the $20,000 WEC Hunter Derby 3’6″-3’9″, the prestigious Style of Riding Award was presented to Melissa Donnelly for her classic style and her sportsmanship. The Style of Riding Award is generously donated by Bill Rube to be awarded to the rider who best displays the American Style of riding in the ring and sportsmanship outside of the competition arena. The recipient serves as a role model for preserving the integrity and tradition of equestrian sport. “This award is very special to me because the recipient of this award pays it forward both in and out of the show ring,” says Rube. Donnelly received an elegant leather duffel bag and wore a white rose corsage on her lapel throughout the handy round to signify her achievement.

Sally Stith-Burdette, Director of Marketing for Shapley’s, was on hand to present The Shapley’s Champion Groom Award to Eduardo Gonzalez, groom of the 1st place finisher in the $20,000 WEC Hunter Derby 3’6″-3’9″, Jordantinus, for the best turnout in the class. Shapley’s is a proud sponsor of the World Equestrian Center and is thrilled provide an award each week of the Winter Spectacular to the groom of the best turned out horse. Gonzalez received a Shapley’s Award Bucket for Jordantinus’ stunning turnout.