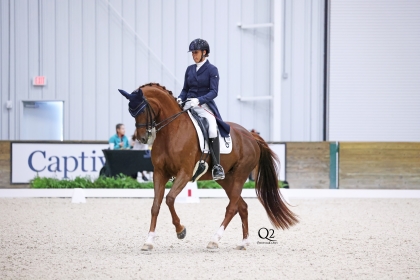 Wellington, Florida-based professional Andrea Woodard made the four-hour trip to Ocala with two horses to compete, along with a host of pupils and clients she trains. Her four rides garnered four wins, all with scores north of 72%. Two of those victories came at Grand Prix level courtesy of Ravenna, her own 11-year-old Dutch Warmblood mare. Woodard has owned the daughter of Sir Donnerhall I since she was a three-year-old, having bought her when she was working at Helgstrand Dressage in Denmark and while she was pregnant with her son.

“It was really inconvenient, but I fell for her and ended up with two babies,” explained Woodard, who was born in New York but grew up in Denmark. “When I moved to the U.S., I brought her over here. She’s always shown talent but not always been the easiest horse to get through the levels, so it’s taken a bit longer than I thought. This show was an important piece of the puzzle; it’s been a while since we’ve taken her out, and it was a good opportunity to see how she would handle a new venue so I can get better at knowing how to prepare her. Just because a horse can do 15 one-time changes doesn’t mean they’re ready; they need the strength and capacity to chain it all together, and in different places. That’s a whole different ballgame.”

“We did two good, solid tests,” said Woodard, who was competing at WEC – Ocala for the first time. “I worked hard on making her feel good and secure at the level and now I can build on that and improve things like bringing the poll higher or adding a little more bend. The goal for her is CDIs, but I don’t want to be greedy and jump into that too fast. I’ll probably do a couple more national shows, and maybe come up to WEC again. It was a great experience. A whole group of my clients went together, and everyone was super happy. The facility is great with good, big stalls. There’s nothing different we’d ask for.”

“He’s world class,” enthused Woodard, who was riding the son of Franklin at only his second-ever show. “He’s extremely relaxed together with all the ability you want. He did two solid tests, with both judges giving him over 76%. What more can you ask for? He’ll have a little vacation now, then we’ll figure out what’s next. Now I know he is not stressed, and he felt like he would at home, so we don’t need to do a ton of shows with him.

“I want to develop him to Grand Prix and hopefully he will be a team horse for some of the bigger events,” continued Woodard, who has ridden him for two years. “I think he has everything both physically and mentally to do that. You can hack him on the buckle, but he also does everything at just seven years old, and that combo of ability and mindset is very rare. I educate him, and Annette rides him too; it’s great that he allows us to do that.

“He has so much quality that you don’t even have to push him. You’re sitting on this rubber ball and, yes, he’s a bit baby body and legs all over the place, but a couple of years down the line he will be phenomenal,” she concluded.

Grand Prix rider Jessica Howington, whom Woodard coaches, was unbeaten at this show. She piloted her new horse, the nine-year-old Indigo TC, by Dream Boy, to triple victory at Prix St. Georges level, scoring above 72% in every test.

Another of Woodard’s pupils, the para rider Ellie Brimmer, showed Langagers Krack I Love It in the FEI Para III Team and Individual tests, gaining 72.2% and 75.7%, proving that they are a combination to keep an eye out for in the future.

Local rider Anna Marek brought seven horses to the show, spanning classes from First Level to Grand Prix. She came away with 10 wins from 12 starts with her team of seven horses. Her top score was produced by Fire Fly, Janet Simile’s 12-year-old KWPN gelding. The son of Briar Junior topped the Grand Prix Freestyle class with 78.75%.

Brian Hafner was the only person to beat Marek during this show, logging two wins at Third Level on his own eight-year-old Danish Warmblood gelding, Shiva. Their two plus-74% scores at the level relegated Marek and Igor-John to second place in both classes.