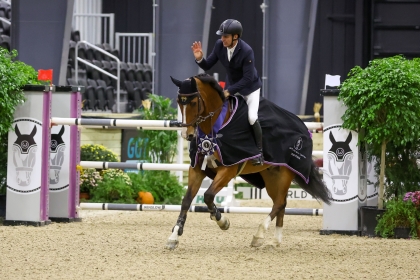 Santiago Lambre (BRA) won the $75,000 WEC – Wilmington Grand Prix for the second week in a row this time aboard his own Pampero.

“I wanted to be fast but not go too quickly to risk a rail. I stayed as tidy as I could in all the turns, and Pampero is naturally quick off the ground so that worked to my advantage.”

“‘Active’ has a large step so I left out a stride in the last two lines. I used his efficiency across the ground and over the jumps throughout the rest of the course.”

Jeff Gogul and Roaring Brook LLC’s No Doubt captured the top prize in the $10,000 USHJA National 3′ Open Hunter Derby. The pair earned impressive scores of 93 and 94.

“I don’t know if I will ever have another horse that will go in the ring and perform the exact same each time. It only took one horse show and one derby to put it all together with him. He knows his job and does it extremely well.”

Skylar Wireman and Coastal owned by Emily Williams were victorious in the $10,000 USHJA National 3’ Non Pro Hunter Derby earning scores of 92 and 90.

“I had a total of three horses in the handy. The first two are more experienced and I have been riding them for one or two years now, so I planned to be pretty slick on both,” told Wireman. “My plan was similar with Coastal, but I took just a second more in the corners and didn’t take any extra risks, knowing that I was leading coming back.”

“I wanted to see how he would do with the inside turns, so I planned a track that would test his rideability. Andy’s Boy did each inside easily and he was looking for the next jump after each fence.”

Samantha Roper and her own Al Betcha Wanna Look earned the blue ribbon in the $3,500 WEC 2’6” Non Pro Hunter Derby, besting 20 other competitors.

Congratulations to all horse-and-rider combinations on another fun week of equestrian sport!