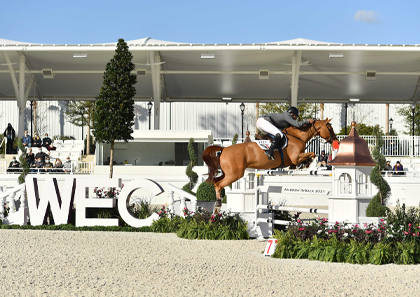 This afternoon brought plenty of excitement to the WEC Grand Arena for the $75,000 WEC Grand Prix 1.50m and the $7,500 Futures Prix 1.40m. While there was an impressive roster of international riders in the field, two riders dominated the top 12 placings in the $75,000 WEC Grand Prix 1.50m in a battle for 1st place, while earlier in the day the $7,500 Futures Prix 1.40m saw one entry pull ahead of the pack for a clear win.

The course for the $75,000 WEC Grand Prix 1.50m was designed by Bobby Murphy of Lexington, Kentucky and featured a double combination, multiple liverpools, triple combination and a skinny jump, truly testing entries on every level. The class was a thrilling battle between Aaron Vale of Thinkslikeahorse in Williston, Florida, and Tracy Fenney of MTM Farm in Flower Mound, Texas, with seven of the top 12 placings being claimed by the two riders on multiple horses. Though they were neck and neck throughout the class, it was Aaron Vale who emerged victorious with Thinkslikeahorse’s Elusive (Rodrigoo x Alouette) for the second week in a row.

Like last week, Aaron Vale and Thinkslikeahorse’s Elusive (Rodrigoo x Alouette) were first in the order today. Vale and the 12-year-old Dutch Warmblood gelding flew to a 1st place finish in last week’s $75,000 WEC Grand Prix 1.50m and were determined to nab another shot at the win. The pair did just that, jumping a clear first round in a time of 83.492 seconds, well within the time allowed of 85 seconds.

Next in the order were Thursday’s $20,000 Welcome Prix 1.45m winners Tracy Fenney and MTM Farm’s MTM Apple (Favorit Ask x Kong’s Whopsie). Fenney and the 9-year-old Danish Warmblood mare were on fire on Thursday and carried the same spark into this afternoon’s class. The pair nailed a clear first round in 83.083 seconds, securing a spot in the jump-off.

Vale returned later in the order aboard last week’s runner up in the $75,000 WEC Grand Prix 1.50m, Sleepy P Ranch LLC’s Major (Carmargue x Pinot). Last week, Major’s clear jump-off time was just two seconds off of Elusive’s jump-off time and Vale was determined to close the small gap between his mounts this week. Vale and the 13-year-old Danish Warmblood gelding were slightly more conservative in the first round, jumping clear in a time of 84.565 seconds, making sure to save plenty of energy for the jump-off.

First to return in the jump-off were Vale and Elusive. With few available inside turns, the pair stepped on the gas, surging forward between fences, leaving all rails up in an impossible time of 40.670 seconds, which would prove unbeatable. Fenney and MTM Apple were next to contest the short course. Though they left all rails up, they could not catch Vale and Elusive’s time, stopping the clock at 41.586 seconds and sliding into the 2nd place spot, which they held for the remainder of the class. Vale returned later in the order aboard Major, again giving the course their all. The pair stopped the clock with a clear round at 43.543 seconds, claiming 3rd place.

Vale piloted two additional mounts to a top-12 finish. He and Empire Show Stables’ Boreale De Talma (Quick Star x Reggae de Talma), a 9-year-old Selle Francais mare, finished in 7th place with a speedy time of 42.983 seconds on the short course and one unlucky rail. Vale also finished 12th aboard Troy Glaus’ Mr. Incredible (Inshallah de Muze x Zuduela). He and the 8-year-old Warmblood gelding had one unfortunate rail in the first round, but their speedy time of 82.792 seconds kept them in the ribbons.

Today’s $7,500 Futures Prix 1.40m saw a field of 28 entries vying for the win over a course designed by Bobby Murphy of Lexington, Kentucky. The track featured 15 jumping efforts including a triple combination and a double combination. With seven entries jumping double clear and few opportunities for inside turns on the short course, speed was the determining factor and it was Katia Manuel-Adams and Manuel Show Stables’ ERP van www.olland.biz (Amadeus x T’olga) that flew to the win.

The pace in the class was set early on by Matthias Hollberg and Jacqueline Mars’ D.A. Duras (Numero Uno x Medoc). Hollberg and the 12-year-old KWPN gelding earned first place at the Tryon International Equestrian Center in both the $15,000 Tryon Resort Jumper Classic and the $5,000 Horseware Ireland Welcome Stake there in November, signaling that they would be strong competitors in today’s class. The pair easily managed a clear first round in 87.636 seconds, then continued straight to the jump-off. They picked up pace throughout the course, jumping a second clear round in 44.883 seconds, setting a tough time to beat.

Hollberg and D.A. Duras held the lead in the class until Katia Manuel-Adams and Manuel Show Stables’ ERP van www.olland.biz (Amadeus x T’olga). Manuel-Adams and her 11-year-old KWPN stallion are no strangers to the winner’s circle at World Equestrian Center in Wilmington, Ohio, taking the win in the $5,000 Welcome Stake 1.35m in March of 2019. The pair were in great form for today’s $7,500 Futures Prix 1.40m, navigating a clear first round in a quick 83.661 seconds and advancing to the jump-off. Manuel-Adams and ERP van www.olland.biz kept their speed on the short course, leaving all rails up in a time of 43.001, which would prove unbeatable.

Rounding out the top three finishers in the $7,500 Futures Prix 1.40m were Marcus Gruenthal and Linda Bammann’s P.S. I Love You (Perigueux x Hauptstutbuch Antoinette). Gruenthal and the 8-year-old Oldenburg mare have earned ribbons in 1.30-1.40m classes, preparing them well for today’s class. The duo was also quick and clear in the first round in a time of 84.542 seconds, then continued straight to the jump-off to jump a second clear round in 45.871 seconds for a 3rd place finish.