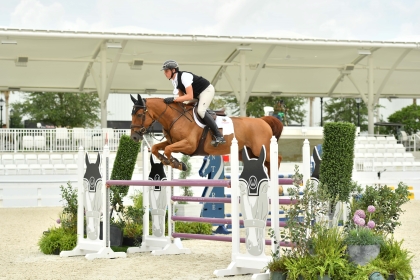 Ocala, FL – On Saturday afternoon, an impressive field of twenty-nine horse-and-rider combinations took to the WEC Grand Arena to vie for the top prize in the $10,000 Buckeye Nutrition Futures Prix. Although the time allowed became a factor for many, eleven pairs managed to produced a clear first round.

Holtgers spoke about the talented gelding, “My parents bred him. He is an amazing horse. He has been ridden by many skilled riders as a young horse. Just this year I began riding him, which means a lot to me because he is homebred. This was probably my sixth or seventh show with him and he as been doing so well. After Summer Series we will head to Germany until it’s time to come back for the winter circuit.”

When it came time for the jump-off Holtgers had a plan, “I saw quite a few riders have one down and there was only a couple double clean, but they weren’t very fast. I thought if I rode the inside track, I could be faster, and it worked out well.”

Holtgers and the 11-year-old Zangersheide gelding produced a flawless jump-off, stopping the timers in 35.493 seconds for the victory.

Belen Guarderas and her own 10-year-old Holsteiner mare Nayla (Nerrado x Alanda) went straight to the jump-off after the pair delivered a clear first round well within the time allowed of 86 seconds. Guarderas and Nayla produced an efficient jump-off in 36.656 seconds for the yellow ribbon.

Garcia and the nine-year-old Holsteiner stallion were one of the lucky 13 to navigate a clear first round. “He is an incredible horse. He continues to get better and better with each class. In the next two weeks, I hope to do some bigger classes and progress.”

The impressive duo navigated the course for a faultless jump-off, jumping each fence to the top of the standards to stop the clock at 41.195 seconds.

Kris Killam and his own Cascaya L (Camax L x Cathleen) secured the third place spot in the class. Killam and the speedy 12-year-old Warmblood mare flew through the jump-off in 43.409 seconds to round out the top three.