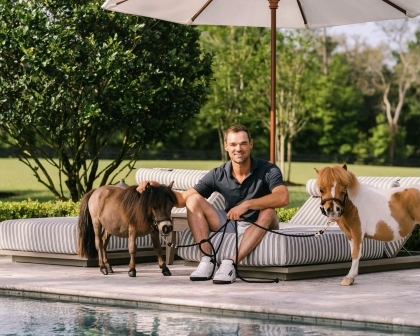 This week’s Ocala Sunday Spotlight shines on Josh Dolan, a talented hunter/jumper rider and founder of The Peeps Foundation.  The Peeps Foundation is a sanctuary for neglected mini and dwarf ponies that focuses on two chapters: rescue and rehoming, which helps find forever homes for healthy, able-bodied minis, the second chapter boasts a sanctuary for horses, minis and dwarves that have special needs. Dolan recently purchased a property right across from World Equestrian Center – Ocala, and he is currently building a new farm and permanent sanctuary. We caught up with Josh to learn more about him and The Peeps Foundation.

I began riding at an early age. I didn’t come from a horse family, so I go into riding from my love for animals. I did the jumpers when I was a teenager and took a break for a while to pursue other sports like tennis. After some time off, I realized how much I missed the sport.

Before I relocated to Ocala, I was living in Lexington, Kentucky for half the year then in Wellington, Florida during the winter months. I have a small operation with a good family-friend Meggin Patterson. We’ve had our own operation for a bit now. Meggin has a few horses and I have a few of my own. Most of the horses are sale horses and along the way I picked up a few very nice clients.

I have always enjoyed hunters. My ultimate goal is to compete at Derby Finals, but every time I have a horse that qualifies, it ends up getting sold right before the show.

WEC: What horses have you been showing at World Equestrian Center – Ocala’s 2022 USEF Summer Series?

Ipanema is an amazing hunter owned by Belle Rolfe. I have been showing him in the big derbies since the winter circuit. He’s a great horse and he’s so much fun to ride.

The grand prix jumper, Bionce De Monts, is owned by Rebdeck Farm. That horse has a story. Meggin bought him as a seven-year-old. I began showing him and I always had one down no matter what height the jumps were. One day, he started jumping clear. It was amazing all year, we were always clean. He did a few grands prix where he was either second or third. I showed him last December where he had a few down, so we checked him out and it turned out that he had a tumor in his eye socket, that was through his nasal cavity and into his jaw. He was on a trailer in two days to go up to Kentucky to see a specialist. He was there for 10 weeks and he missed the entire winter circuit.

He is just coming back. I did the $50,000 Grand Prix a few weeks ago and he only had one down. Saturday night is a big test. He’s never done a 1.50m under the lights before, but even if he gets a few rails, I think it will be a great experience for him.

I also have a horse called Bromance also owned by Rebdeck Farm. He’s incredible, probably one of the nicest hunters I have ever sat on. He’s a bit tough, but it is so great to be here because I can come and bring him to the show every week and compete in the same ring.

I have another jumper landing on Wednesday that I am very excited about. He has been doing some grands prix in Europe, but my hope is to do the big derbies on him and still do some jumpers as well. I think he could go and do well at Derby Finals, so we will see if I will make it there this year.

WEC: Tell us about the property you purchased across the street from World Equestrian Center – Ocala.

I came to World Equestrian Center – Ocala for the very first show. The hotel wasn’t open yet, but I was already in love with the facility. It’s such a world-class venue that offers so much to the sport, nothing else is comparable. We knew we wanted to be here, which is why we jumped on the opportunity to purchase a farm.

I leased the farm last October for five months, then at the end of the five months I asked the owner if he would be willing to sell it and he said yes. So, we jumped on it right away. The property is 6 acres, and we just purchased the property next door as well, so it will be around 10 acres total. We are going to build a full mini barn. We plan to put 40×40 stalls because we group the minis together depending on whether they are able-bodied or handicapped. I plan to make it an oasis for them. There will be chandeliers and they’ll have their own access to their own dry lot pasture. They already have a pretty good life, but we are going to make it even more lavish.

WEC : Tell us how The Peeps Foundation began.

I wasn’t really looking to start a rescue, it just happened. I was showing in Kentucky and my family came to visit. We went to get lunch and saw a mini farm. I saw Peeps in the front yard and a few other minis in terrible shape. There ended up being about 65 emaciated and sadly a few dead. I called the police, animal control and local rescues, but no one could really do anything. The police did end up coming, but there was a shelter they had access to water in paint cans, so they couldn’t really do anything.

I went back the next day to see that a foal had passed and that’s when I lost my mind. I was either going to take them or buy them. I left a note to whoever owned that property, at that time I wasn’t even sure if anyone lived there, but I got a phone call that night. I ended up purchasing over 40 minis from him.

Peeps got pretty popular quick because she is an adorable dwarf mini, so one thing led to another and now it’s huge. We rescue minis from bad homes and in bad shape. I do their corrective shoeing myself and once the ponies are in great shape and doing well, we rehome them.

All the ponies are living their best life, they get to wander around, they get bathed all the time and clipped so they are always cool and feeling good. It’s so rewarding to see how much their little personalities come out when they realize they are safe. I love each and every one of them so much.

Congratulations Josh on your new farm and welcome to the neighborhood! We cannot wait to meet the minis!

Learn more about The Peeps Foundation.