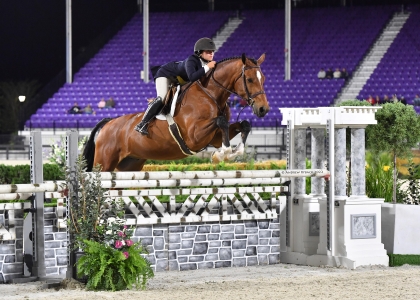 The final $75,000 WEC Ocala 3’6”-3’9” Hunter Derby showcased a competitive field of 29 entries under the lights in the WEC Stadium. Competition was fierce with scores soaring into the mid 90s, but it was junior rider, Augusta Iwasaki and Ashland Farm’s Attendu De Lannois Z (Arko III x Caletina V/D Bremboshoeve) that prevailed.

Iwasaki and Attendu De Lannois Z were the sixth pair to try their hand at Holowack’s rolling tracks, earning the class’s highest first round score of 189.

Iwasaki spoke about her mount, “Attendu, was imported from Europe about two years ago. I fell in love with him immediately. He’s extremely talented and always tries to win for me. He’s my main equitation and derby horse. He’s only nine-years-old, so he is still coming along, but he is truly a once in a lifetime horse.”

Iwasaki and the handsome nine-year-old Zangersheide gelding were the last pair to return for the handy, “The atmosphere was incredible tonight, there was a lot to look at, but Attendu had his game face on. I really enjoyed the handy. The combinations were very testy, but this course offered a gallop to the last fence, which is personally my favorite,” said Iwasaki.

The pair floated over the final fence in perfect form to earn high score of 191, for a total score of 380 for the win.

“I have been competing here for about two months now, and it has been incredible. We have enjoyed our time here so much. I had the privilege of coming to WEC while the facility was being built, but this was my first time here while it was in full production, and it is breathtaking. We love showing here,” expressed Iwasaki.

Before the start of the handy round in the $75,000 WEC Hunter Derby 3’6″-3’9″, the prestigious Style of Riding Award was presented to Brian Feigus for his classic style and his sportsmanship. The Style of Riding Award is generously presented by Bill Rube to be awarded to the rider who best displays the American Style of riding in the ring and sportsmanship outside of the competition arena. The recipient serves as a role model for preserving the integrity and tradition of equestrian sport. “This award is very special to me because the recipient of this award pays it forward both in and out of the show ring,” says Rube. Feigus received an elegant duffel bag and wore a pink rose corsage on his lapel throughout the handy round to signify his achievement.

Forty-three impressive entries gathered at the WEC Stadium early this morning, to vie for the top prize in the $75,000 WEC Ocala 3’ Open Hunter Derby, but it was Jeff Gogul and Roaring Brook LLC’s No Doubt (Nerrado x Abba II) that secured the highest overall score from the judges.

Gogul and No Doubt jumped around the course in stunning style, taking all four high options in to earn a first-round score of 180.5 from the four judges.

“No Doubt is as genuine as they come. He loves to win. I had great success with him last year, winning about $40,000 in derby competitions. He was second in this derby last year, so it was nice to come back this season and win with him,” stated Gogul.

Gogul and the 10-year-old Holsteiner gelding came back for the handy, “I was lower in the order, and Dorrie [Douglas] is a hungry and amazing competitor that throws it all out there, so I knew I had to give it my all. I thought about his strengths and weaknesses. I picked up a strong gallop right from the gate, which gave me a brilliant first jump, after that, I never took back and it just kept flowing.”

The pair rolled around the tidy turns and found each fence at a perfect distance to secure a second-round score of 184, for an overall score of 364.5.

Bill Rube presented the prestigious Style of Riding Award to Hope Glynn in the $75,000 WEC Ocala 3’ Open Hunter Derby. Glynn wore the pink rose on her lapel in the handy round to signify her achievement.

Damas De Tannerre is a brand-new ride for Glynn, “I rode Damas De Tannerre for the first time this morning. He is owned by Don Stewart. He is such a lovely horse to ride. He gave me so much confidence going around the ring. He jumps beautifully no matter what distance you get and really tries to win for you,” said Glynn.

Glynn and the nine-year-old Selle Francais gelding put forth a flawless first round, opting to jump all four high options to earn a score of 175.25 from the four judges.

“The course was a blast. It was so much fun to be able to ride in an arena like that with such a great atmosphere. The courses didn’t have a lot of related lines, which I really enjoyed,” voiced Glynn.

The pair returned for the handy with the goal of producing a smooth round, “The Open derby went earlier so I was able to watch the course. I knew the track that I wanted to take with all of the inside turns. He’s such a brave horse, I was able to angle the two-stride hay bale line to turn swiftly back to the next jump.”

Glynn and Damas De Tannerre laid down an impeccable handy round to earn a high score of 188 for an overall score of 364.25 for the win.

Bill Rube was a competitor in the $75,000 WEC Ocala 3’ Jr/Am Hunter Derby, so Josh Dolan stepped in to present the award. Dolan awarded Bill Rube the Style of Riding Award, “Bill is always the best sport when he leaves the arena. He does so much for everyone, and I think it’s time that we honor him and thank him for everything that he does.”

Congratulations to all on an incredible day of top hunter competition!