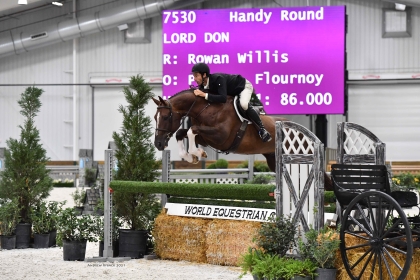 Hunter Derby Friday took over the CaptiveOne Advisors Indoor Arena as more than 40 stunning hunters vied for the win in the $12,500 WEC Ocala 3’6”-3’9” Hunter Derby and the $10,000 WEC Ocala 3’ Hunter Derby. Tucker Williams designed the winding track that contained beautifully decorated obstacles allowing riders to demonstrate their horse’s brilliance. Each class saw fierce competition with scores soaring into the 90s.

This afternoon’s $12,500 WEC Ocala 3’6”-3’9” Hunter Derby saw 11 entries fighting for the win, but none could best World Cup rider, Rowan Willis, and Page H. Flournoy’s Lord Don. Australia’s Willis and the 10-year-old stallion earned third place in last week’s $12,500 WEC Ocala 3’6”-3’9” Hunter Derby. “This is only our third week competing in the hunters. He was doing the jumpers, but he is very laid back, so the hunters suit him well. I’ve also always wanted to win a hunter derby,” said Willis.

This afternoon Willis and Lord Don (Don VHP Z x Lady Hamilton) brought their A-game, delivering a gorgeous first round taking all three high options with ease to earn a score of 86. Willis finds the hunter ring a bit trickier, “It isn’t easy for me to go into the ring and stay still. I am so used to doing so much in the jumpers, I find it tricky to sit there and stay super relaxed. Luckily, Lord Don makes is much easier for me. We are both getting more confident each time we step into the hunter ring.”

Willis took off his jumper hat and put on his hunter cap. Willis and Lord Don returned for the handy, “I wanted to be a bit more positive in the handy than I have the past two weeks. We took every inside turn and got a nice gallop to the last fence.” The pair delivered a flawless course taking all three high options to earn the class’s highest handy score of 91, for a two-round total of 177.

Third place was conquered by Dorothy Douglas and MTM Exceptional (Casall Ask x Rheinsberg). Douglas and the 12-year-old Holsteiner gelding delivered an impeccable first round, completing all three high options to earn a high score of 88. The pair returned for the handy taking numerous inside turns while jumping all three high options to receive a handy score of 76, for a total score of 164.

Thirty horse-and-rider combinations gathered to the CaptiveOne Advisors Indoor Arena late this morning to contest the $10,000 WEC Ocala 3’ Hunter Derby but it was Timothy Maddrix and Missy Roebuck Nolen’s Cypress that claimed the top spot.

Maddrix and Cypress are familiar faces in the WEC Ocala 3’ Hunter Derby, earning first place in Week II’s hunter derby. Maddrix and the 10-year-old Warmblood gelding delivered a beautiful first round, earning a high first round score of 88.5. Maddrix enjoyed the first course, “I thought the first course rode great. I really liked that the lines flowed and were more forward.”

Maddrix and Cypress hunted to the last fence, delivering another perfect course to receive the highest handy score of 93, for a two-round total of 181.5.

Rounding out the top three in the $10,000 WEC Ocala 3’ Hunter Derby was Kim Barone and Dialicious. Barone and Dialicious have had previous success in the class earning first place during Week I’s hunter derby. The pair delivered two faultless rounds taking all three high options in both courses, which earned a first-round score of 88 and a handy score of 91, for a two-round total of 179.