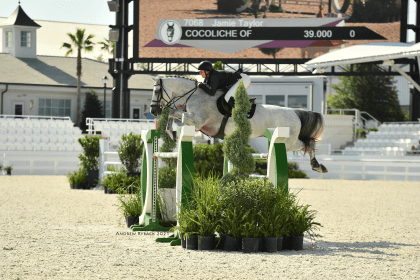 Feature class action for Week VIII of the Ocala NSBA Summer Series kicked off early this morning as 34 horse-and-rider combinations vied for the win in the $15,000 WEC Ocala Welcome Prix. Tucker Williams designed the winding track that featured multiple combinations and tricky bending lines with a tight time allowed of 79 seconds. Fifteen entries managed a clean first round and nine jumped double clear, but it was Jamie Taylor from Temecula, California and Ali Nilforushan’s Cocoliche of Greenhill Z that snatched the win.

Taylor and the 11-year-old Zangersheide gelding were the last pair to enter the class. Taylor and Cocoliche of Greenhill Z (Biscut of Greenhill x Wyazinthe MH) delivered a smooth and fast, clear first round stopping the clock at 74.257 seconds, well under the time allowed of 79 seconds.

Taylor and Cocoliche of Greenhill Z had to best the current leader Tracy Fenney and MTM Dolce Vita’s fast time of 42.007 seconds. Taylor knew Cocoliche of Greenhill Z does his best in the jump-offs, so she was ready to give it her all, “He is a very careful horse but when you run him at something he gets so catty. So, I figured I would go as fast as I could and try to win.”

The pair started off on a strong gallop, soaring over fence one to slice fence two. Taylor and Cocoliche of Greenhill Z galloped to the chapel fence to produce a tidy roll back to the Tribute Feed oxer. After the oxer, Taylor had a different track in mind than other jump-off competitors, “I went around the [C. Jarvis Insurance oxer] to the double because he’s a little spooky going by things so I didn’t think that would have been a faster track for us. I thought I could gallop around really fast to the double then leave out a stride to the liver pool and it worked!”

Taylor and Cocoliche of Greenhill Z flew to the last fence soaring to the top of the standards to stop the clock at 41.360 seconds for the win.

Last week’s $15,000 WEC Ocala Welcome Prix winner, Tracy Fenney and MTM Dolce Vita were just behind the winning pair. Fenney and the nine-year-old Holsteiner mare entered the class near the end of the order and jumped a clean first round stopping the clock at 75.376 seconds. The pair advanced straight to the jump-off taking every single inside turn available, stopping the jump-off clock at 42.007 seconds setting the speed for the rest of the class until Taylor entered with Cocoliche of Greenhill Z.

Third place honors went Week III and Week VI’s $15,000 WEC Ocala Welcome Prix winner, Jordan Petersen and Diamant’s Legacy. Petersen and the 12-year-old Oldenburg stallion produced a flawless first round stopping the timers at 76.745 seconds. Petersen and Derek Petersen’s Diamant’s Legacy jumped-off immediately, taking a tidy inside turn after fence one to slice fence number two. The pair soared to the Chapel vertical to roll to the Tribute Feed oxer. Petersen ran to the liver pool in an easy six  to fly to the last fence to stop the clock at 43.391 seconds to ultimately earn the pair third place.