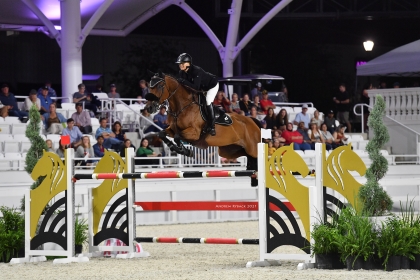 An international list of competitors from 11 different countries lined out the entries in Saturday’s $75,000 Stirrups Restaurant Grand Prix during the third week of the WEC – Ocala Summer Series. FEI Level 3 course designer Joey Rycroft of Canada designed the technical tracks for the grand prix as well as the $10,000 Futures Prix 1.30m – 1.35m, which featured multiple combinations, along with jump-off courses that required adjustability and accuracy.

Saturday evening’s $75,000 Stirrups Restaurant Grand Prix hosted 53 entries under the lights in the WEC Grand Arena. Rycroft’s course included a triple combination, a double combination, and a triple bar. Twelve entries advanced to the jump-off, but it was Erynn Ballard (CAN) and Ilan Ferder’s Ceitasi (Caretello B x Ceitas) that captured the win.

Ballard and Ceitasi yielded a flawless first round, soaring to the top of the standards over each fence, stopping the first-round clock at 82.750 seconds.

“Ceitasi is magical,” said Ballard of the 11-year-old Westphalian mare, who returned to Ballard’s string this year. “I rode her as a nine-year-old and then she was sold in the barn to Natalie Dean who had huge success on her. We got her back to do classes like this; to be a speed horse when I need her. She is reliable and is always on her game. She never lets you down.”

With 12 in the jump-off, Ballard returned for the jump ready to give it her all. “I had nothing to lose,” confirmed Ballard. “I had two very fast riders behind me and in my own riding, my next step is to try and win more classes. In a class like today, being a fast four-faulter wasn’t going to get you a nice ribbon. It wasn’t worth the risk of being a slow clear.”

Ballard and Ceitasi started the jump-off strong and fast, leaving out a stride from fence one to fence two.

“Ilan said to ride it off my eye,” said Ballard. “Once I got the nine [strides] from one to two, I was on a roll.” Ballard and the careful mare rocked through the rest of the jump-off, stopping the clock at a very fast time of 38.937 seconds for the win.

Aaron Vale (USA) and Major, a 14-year-old Danish Warmblood gelding owned by Don Stewart and Sleepy P Ranch LLC, topped last week’s $75,000 Calluna Spa Grand Prix. Vale and Major were the last pair to return for the jump-off, and it was Vale’s second attempt at the shortened course. While he also did nine strides between the first two jumps, Vale landed just short of the winning time in 39.264 seconds for second place.

Thursday’s $15,000 WEC Welcome Prix winners, Tracy Fenney (USA) and MTM Dolce Vita, rounded out the top three placings in Saturday evening’s Grand Prix. Fenney and the nine-year-old Holsteiner mare, MTM Dolce Vita (Diarado x Philadelphia) were also the fastest four-faulters from last week’s $75,000 Calluna Spa Grand Prix. This week, they were clear in the first round in 83.837 seconds, qualifying the duo for the jump-off. Fenney and MTM Dolce Vita galloped through the course with tight turns and forward distances to stop the clock at 40.833 seconds, securing third place.

They advanced straight to the jump-off, galloping through the course to stop the clock at 30.547 seconds. “I wanted to be really fast for fences one, two, three and four because I saw a lot of horses having down the (A) of the combination, so I wanted to be able to take my time then go for the six [strides] in the last line,” said Barrios. “When I jumped in and saw it, it was very long but I never give up and the horse understood what I was asking. He jumped from far but cleared it. He is a little horse with a big heart and a big step.”

Samantha Senft (USA) and her own Desperado earned the third-place title in last week’s $10,000 Futures Prix 1.30m-1.35m. Senft and the 13-year-old KWPN gelding (Up to Date x Unity Grace), found a first clear round in 81.080 seconds, then continued straight to the jump-off, jumping a second clear round in 30.840 seconds to earn second place.

Rounding out the top three placings were Francie Nilforushan and Ali Nilforushan’s Edgarrento, a 12-year-old KWPN stallion by Zento x Numero Uno.  Nilforushan of Rancho Sante Fe, California, and Edgarrento delivered a flawless first round, stopping the clock at 83.238 seconds just under the time allowed of 84 seconds. The pair jumped off immediately, galloping through the finish to receive a time of 31.361 seconds.