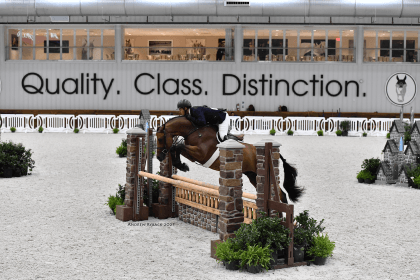 Week IV’s Derby Friday took over the CaptiveOne Indoor Arena as 40 horse-and-rider combinations contested the $12,500 WEC Ocala 3’6” – 3’9” Hunter Derby and the $10,000 WEC Ocala 3’ Hunter Derby. Courses for today’s classes were designed by Doug Russell. Both courses showcased inviting organic obstacles with three high options each. The handy round for each class presented several opportunities to show off athleticism with challenging inside turns.

This afternoon’s $12,500 WEC Ocala 3’6” – 3’9” Hunter Derby saw a field of 16 entries compete for the win. Scores soared into the high 80s and mid 90s, but none could best Brady Mitchell and Casting Call, who scored the second-place win in the class last week. Mitchell and Casting Call (Cornet Obolensky x Laila) were unstoppable this afternoon, completing a impeccable first round, taking all three high options to earn a score of 90.

Mitchell competed multiple horses earlier today in the $10,000 WEC Ocala 3’ Hunter Derby and performed a stunning handy round taking extremely tight inside turns but Mitchell had a different plan for this handy round, “In the smaller derby today, to the third to last fence [fence six] I went inside and inside after the fence but the fences were lower, so it was possible. With Casting Call, I went inside to the third to last fence [fence six] then out and around the one jump, then back inside to the trot jump.”

Mitchell and Casting Call the seven-year-old Westphalian gelding returned for the handy, jumping all three high options to earn a handy score of 95, for a total score of 185 for the win.

Dorothy Douglas and Carlee McCutcheon’s MTM Personal Assistant were also impressive this afternoon. Douglas and the nine-year-old Warmblood gelding had the second highest first-round score of 92, after delivering a lovely first round, taking all three high options. Douglas and MTM Personal Assistant (Cero x Graefinsandra) returned for the handy, taking multiple inside turns with the three high options for a score of 91, and a two-round total of 183.

Twenty-five entries gathered to the CaptiveOne Indoor Arena this morning to compete for the blue ribbon in the $10,000 WEC Ocala 3’ Hunter Derby but it was Clair Kellner and Caligua that claimed the top spot.

Kellner and Caligua the nine-year-old Holsteiner gelding owned by Suzanne Cayatte, performed a stunning first round, taking all three high options to earn the highest first round score of 90. “We have had him [Caligua] since he was four, so I have had a lot of experience on him in these types of classes and he has been nothing but great. Classes like these are just easy for him,” said Kellner.

Kellner really enjoys competing on Caligua, “He has a massive stride and a ton of jump. He can still go really slow and turn, which is very cool because he is a tall horse, but he is extremely athletic.”

Kellner had to change her plan for the handy last second, “Originally, I was talking to Brady [Mitchell], saying I was not going to go and do the inside turn after the fence [fence six] but then he did it, so I had no choice.” Kellner and Caligua returned for the handy taking multiple inside turns, while jump all three high options, to earn a score of 89.5, for a two-round total of 179.5.

Brady Mitchell and his own Pompidou, who won last week’s $10,000 WEC Ocala 3’ Hunter Derby, earned the second-place finish in this morning’s class. Mitchell and the recently imported seven-year-old Westphalian gelding started the class off strong, jumping all three high options in the first round to receive a score of 84. Mitchell and Pompidou (Pilothago x Haya Z) returned for the handy round taking every inside turn that was available, while taking all three high options to earn the classes highest handy score of 90, for a total of 177.

Rounding out the top three in the $10,000 WEC Ocala 3’ Hunter Derby was Carlee McCutcheon and Reagan Golsby’s Edinburgh. McCutcheon and Edinburgh the 12-year-old Dutch Warmblood gelding produced a smooth first round, jumping all three high options to earn a score of 84. The pair retuned for the handy, rolling through the inside turns and taking all three high options for a score of 89, for an overall score of 173.